Internet charmed by small band of women who marched in tiny N.S. village 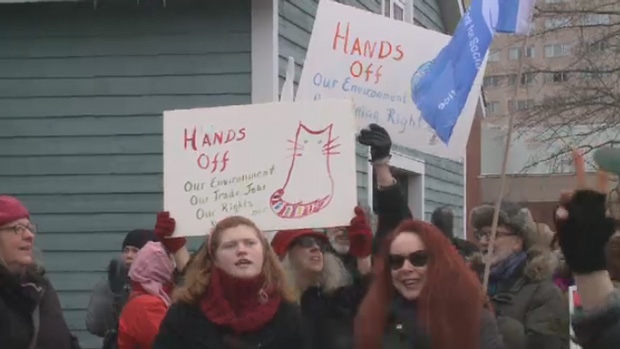 HALIFAX- Protesters across the Maritimes took the streets on Saturday in a show of women power.

DIGBY, N.S. -- When Gwen Wilson and Melissa Merritt decided at the last minute to organize their own women's march, they were prepared to be the only ones trudging down the sole road in their rural Nova Scotia village on a grey, drizzly Saturday.

The two women who live on the Digby Neck peninsula both wanted to participate in one of the international marches to support women's rights, but would have had to travel almost three hours to get to the closest one in Halifax.

So less than 24 hours before millions of people took to the streets around the world, they issued a call to the 65 year-round residents in Sandy Cove and others in villages that dot the peninsula to join them for their own march, expecting they might be alone in their activism.

When they assembled at the assigned meeting spot -- a school in Sandy Cove that has 22 students -- they were stunned to see about a dozen other women, two men and a few children ready to go.

"We were ecstatic and were like, 'Oh my gosh, there's another truck coming in!"' Wilson exclaimed Tuesday. "It was just a wonderful, joyful feeling of, I don't know -- it's almost indescribable the feeling that you have when people chose to participate with you and you don't even know some of them."

What's more, Wilson says they have been overwhelmed by the response to an eight-second video posted on their Facebook site that shows the 15 marchers laughing and ringing bells as they walk along an empty road that cuts through the fishing community. From a distance, the group can be seen marching down a steep hill and then up another to the fire hall, waving their banners as they slosh through puddles on the narrow road.

"Your march touched me more than any of the others I've seen. It's so often we feel we are too small to change anything. Sometimes the one lone voice is much louder than the millions. Thank you!" one woman wrote on the Facebook page.

Another said: "My boyfriend and I drove from NYC to DC to participate in the March. Now I wish I had come to Sandy Cove to march with you. Way to go!"

Wilson said the response has been moving.

"The reaction has been totally overwhelming and very humbling to know that people want to reach out and make that connection," she said.

Photos of the small band of marchers, some wearing telltale pink hats knit by a local resident, that were taken by Wilson's husband have been circulating online as well, even attracting the interest of The New York Times.

Both women say they just wanted to make a statement and be part of history, but have been delighted by the attention their march has drawn to the quiet community.

Merritt, one of about 30 people who lives nearby in East Ferry, said they got some funny looks from passersby during the march but were generally supported by the roughly 20 cars that passed them, including lobster trucks that blared their horns as they drove by.

The 44-year-old yoga instructor said one person pulled up to find out what was going on, questioning why they were bothering to protest U.S. President Donald Trump in a far-flung Canadian village. She said it anchored her belief in the importance of registering her disapproval of comments Trump made throughout the campaign she found racist and sexist.

"I think seeing all of these women hold each other up and be kind to each other -- it's emotional," she said. "The lesson that I've learned is how many women do support each other. I've never been so supported ever!"