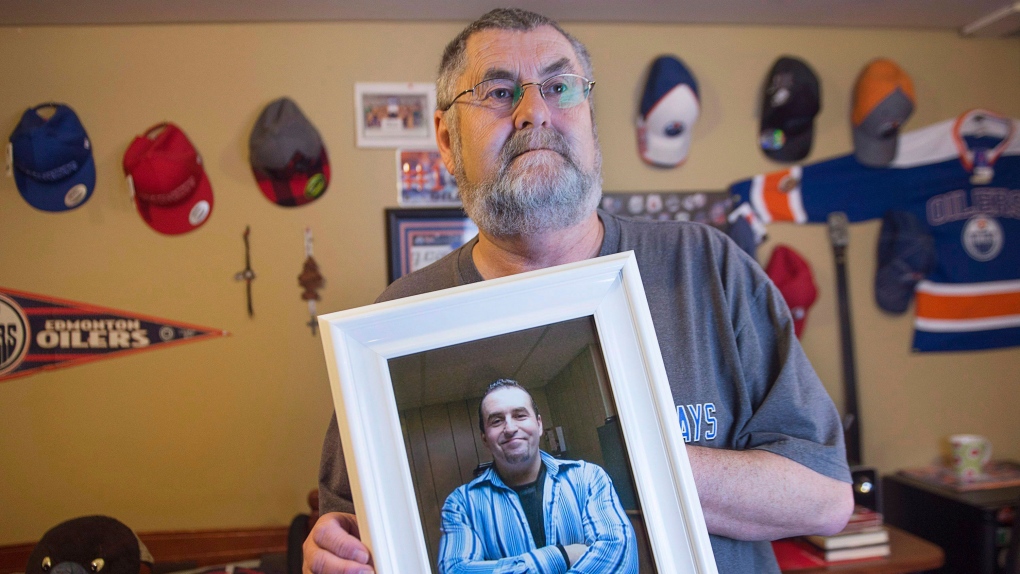 Ernie LeBlanc holds a photo of his son Jason LeBlanc at their home in Sydney Mines, N.S. on Monday, March 14, 2016. Jason died in custody at the Cape Breton Correctional Centre in January. (THE CANADIAN PRESS/Andrew Vaughan)

HALIFAX -- Correctional officers at a provincial jail in Cape Breton failed to follow proper procedures earlier this year when they placed a man in a cell, where he died of a drug overdose 13 hours later, Nova Scotia's Justice Department says.

The department's review of the case, released Monday, says that when Jason Marcel LeBlanc was admitted to the Cape Breton Correctional Facility on Jan. 30, staff did not follow all steps in the strip search process, and they failed to complete their rounds at standard intervals.

As well, the department concluded staff did not get a required health transfer form or an explanation for why escorting officers didn't have one.

"Failures to meet the standards established in policy will be addressed through disciplinary action, where appropriate, and through coaching," the review said.

No details were provided about the lapses or how they were dealt with.

LeBlanc's father has repeatedly alleged that jail staff failed to do enough to ensure his son's safety after he was arrested for a parole violation.

"He didn't have to die," Ernie LeBlanc said in an interview. "He was a human being ... Yes, he was an addict, but he wasn't a piece of dirt."

An earlier autopsy report said Jason LeBlanc had entered the cell with a bag full of pills and near-fatal levels of methadone in his blood. That report concluded he overdosed on a combination of methadone and bromezapan, an anti-anxiety drug he swallowed while in the cell.

However, the Justice Department review says the 42-year-old labourer did not show signs of impairment or indicate any health concerns when was seen by health-care staff at the jail.

The department says no contraband was found on LeBlanc, but it says images taken by a surveillance camera inside the cell suggest he had probably consumed illicit drugs taken from a small bag concealed in a body cavity.

"They didn't even do a proper search," he said. "They can't prove that my son was carrying those drugs internally. It's a guess ... There's no proof."

However, the director of Correctional Services conceded there's no way of knowing for sure if the drugs were concealed in a body cavity.

Ernie LeBlanc said health-care staff should have noticed his son was highly intoxicated by 6:33 p.m., given the amount of drugs in his system.

"There was a window of opportunity to save his life," he said. "But they just walked away left him in the cell."

The review says health-care staff had little to say about the inmate's condition.

"No recommendation or advice was received from health care for special precautions, special watch of the offender or that the offender should be transported to the hospital," the review says.

The review did not include any input from health-care officials or a review of health records because such measures are prohibited by the Personal Health Information Act, the Justice Department said.

"My heart goes out to Mr. LeBlanc's family and loved ones," Justice Minister Diana Whalen said in statement. "We will use this tragic situation to improve our procedures going forward."

The province's Correctional Services branch, which is part of the Justice Department, has committed to consult with health-care professionals about reducing the risks associated with drug overdoses.

As for the autopsy report, it said the surveillance video showed the inmate's breathing started to slow at 1:50 a.m. on Jan. 31, and it took 45 minutes before corrections officers found him unresponsive in his cell. He was declared dead at 2:45 a.m.

The video images also show Jason LeBlanc pulling a bag of bromezapan pills out of his pants before he begins to lose consciousness, says the June 8 report by Dr. Marnie Wood.