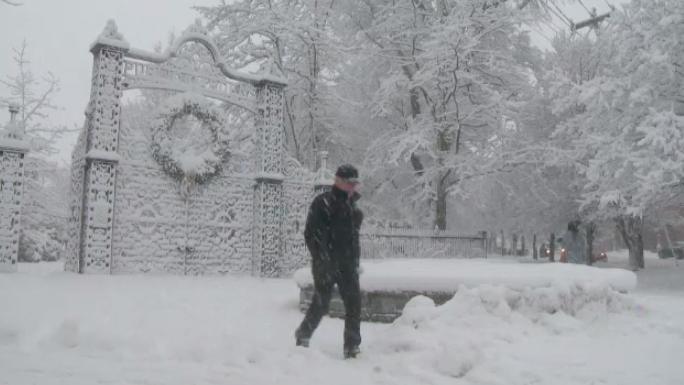 A pedestrian walks past the snow-covered entrance to the Public Gardens in Halifax during a storm on Jan. 8, 2020.

HALIFAX -- Yes, it is January in Canada. Yes, the cold in the Maritimes Friday won't match that experienced in western areas of the Country. That said, the combination of falling temperatures and strong winds in the wake of the storm that will be bringing blizzard conditions to areas of Newfoundland will create one of the more unpleasant feeling days of this winter season.

Winds will increase Thursday evening out of a north and northeast direction peaking with gusts of 40 km/h to 70 km/h. Through Friday morning, those winds turn north and northwest with more widespread gusts of 50 km/h to 80 km/h, except 90 km/h to near 110 km/h for areas of P.E.I. and eastern Nova Scotia, including Cape Breton.

Wind warnings have been issued for eastern Nova Scotia, with a special weather statement in effect for Kings County, P.E.I. If work or leisure takes you to the coastline for these areas on Friday, be aware that a very rough and pounding surf will be present. 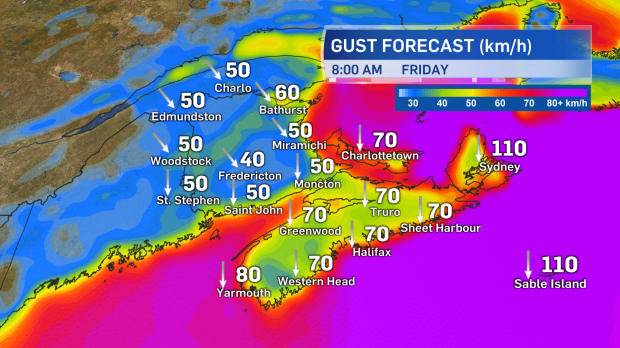 High north and northwest winds will blow across much of the Maritimes Friday. The strongest gusts are expected for P.E.I. and eastern areas of Nova Scotia.

The northerly winds will draw down Arctic-sourced air from northern Quebec and Labrador. Temperatures for most of the Maritimes will not only fall Thursday evening, but will continue to fall into Friday afternoon. When combined with the wind, wind chill Friday will make many feel in the range of -24 to -30. Wind chill making it feel -28 or colder does come with a risk of frostbite to exposed areas of skin in 30 minutes or less. Those more extreme wind-chill values are most likely for northern New Brunswick, P.E.I, and eastern Nova Scotia.

Friday will be a day to pull out your warmest winter clothing, particularly for the kids. 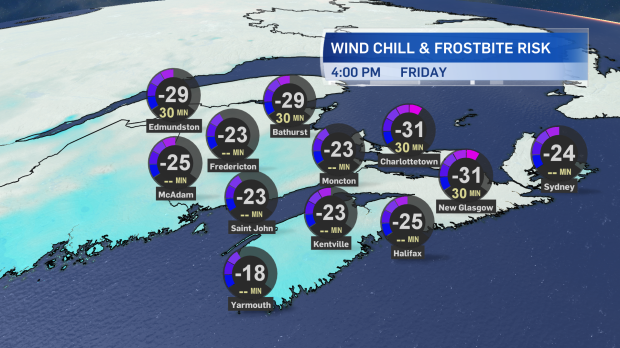 Wind chill will make it feel -24 to near -30 for much of the Maritimes Friday. There is a risk of frostbite in 30 minutes or less to exposed skin when the wind chill is below -27.

As the cold northerly winds blow over the Gulf of St. Lawrence and Cabot Strait they are likely to generate flurries and snow squalls. The more intense snow squalls will be in eastern P.E.I., around the north shore of mainland Nova Scotia, as well as in Cape Breton. Those caught in a snow squall will experience periods of near white-out conditions as well as accumulating snow. Flurries with a risk of more intense snow squalls will stream in off the Gulf for P.E.I. and areas of eastern Nova Scotia through Friday.

Both the wind chill and risk of snow squalls will ease Friday night and Saturday morning with diminishing winds as a ridge of high pressure builds in from the west.