Two people -- including a man who has been identified as the leader of an extremist group -- have been charged after anti-mask protesters gathered outside the home of Nova Scotia’s chief medical officer of health three nights this week.

Jeremy Mitchell MacKenzie, 36, of Pictou, N.S., and Morgan May Guptill, 31, of Cole Harbour, N.S., have each been charged with criminal harassment, mischief, harassing phone calls and intimidation of a health professional.

The first protest took place Sunday evening, hours before Nova Scotia was set to lift most of its COVID-19 restrictions.

Dr. Robert Strang was at his home in Fall River, N.S., at the time and confronted one of the protesters, who was parked in a car near the driveway to his home, around 8:30 p.m.

The protesters brought signs that read "unmask our children" and "stop the mandates."

While Nova Scotia has lifted mask mandates in most spaces, masks are still required in public schools until mid-April, in line with the advice of a group of pediatric health experts at the IWK Health Centre. Masks are also still required in health-care settings, long-term care homes and adult residential centres.

After a brief conversation, Strang took down the licence plate number of the car and called the police.

RCMP officers closed off the street to Strang's home temporarily, to stop any other protesters from gathering at the site.

The RCMP says the protest lasted a few hours and the protesters left on their own.

Strang told CTV Morning Live during an interview that the protesters also made prank phone calls to his home at 2 a.m. Monday.

"I'm not quite sure what point they're trying to make at this stage in the pandemic," said Strang Monday morning. "Very unfortunate, and a very small group that I know the vast majority of Nova Scotians have no kind of tolerance for." 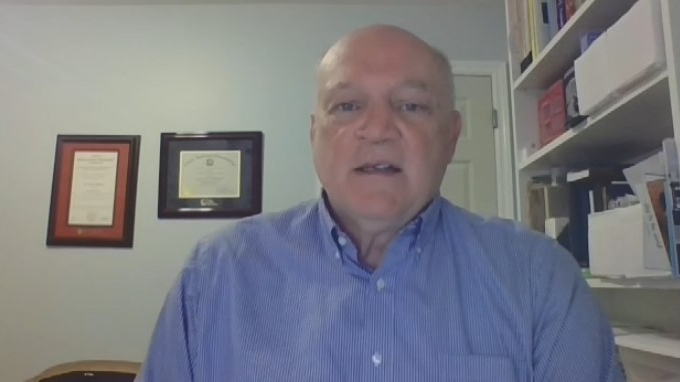 The RCMP says the protesters returned to the home a third time Tuesday evening.

No arrests were made outside Strang’s home during any of the protests, but Halifax Regional Police did arrest two people “as part of an ongoing investigation into activity associated with the protests” on Pleasant Street in Dartmouth, N.S., early Tuesday evening.

The RCMP told the protesters outside the home that two people had been arrested in Dartmouth in connection with the incidents and police say they left the scene.

“These protests were targeted at an individual and their private residence,” said Halifax District RCMP Const. Guillaume Tremblay in a news release.  “The evidence collected during the investigation gave investigators reasonable ground to believe that criminal offences had been committed.”

MacKenzie and Guptill were held in custody overnight. They were due to appear in Dartmouth provincial court Wednesday for a bail hearing, but the matter was put off until Friday.

Strang declined to comment on the matter Wednesday, but the Nova Scotia Department of Health and Wellness issued the following statement on his behalf:

"Dr. Strang wishes to pass along his sincere thanks to law enforcement for their action in addressing the incidents taking place outside of his home. As this is now a matter before the courts, he will not be commenting further," said Marla MacInnis, media relations advisor for the department.

WHO IS JEREMY MACKENZIE?

According to MacKenzie’s Facebook page, he is a former infantryman with the Canadian Armed Forces.

In his profile, he refers to himself as a veteran, “sub-standard Podcaster, Sit-Down Comedian, Anti-Govt super villain,” and “Very Scary.”

He attended the “Freedom Convoy” protests that took over downtown Ottawa and posted videos from the event online, in which he encouraged the blockades.

MacKenzie also live-streamed from Monday’s protest on his Facebook page. In the video, he criticizes the decision to keep mask mandates in public schools.

“Why did you lift the mandates for everyone else? For everything else? Why is it that my kids and everyone’s kids, who are really looking forward to going back to school and not having to muzzle their faces … why?” asks MacKenzie of Strang in the video.

“He doesn’t have an answer because he’s an idiot. He doesn’t know what he’s doing … he’s a moron that does what he’s told and he collects his pay cheque and he goes home.”

He goes on to call Strang “mentally ill” and a “compliant puppet for corporations and pharmaceutical companies.”

MacKenzie has been identified by the Canadian Anti-Hate Network (CAHN) as the de facto leader of Diagolon in Canada. CAHN identifies Diagolon as a far-right extremist group.

According to the CAHN, MacKenzie is also the source of the concept of Diagolon, which started as an online joke referencing a fictional nation state of “sane” people who reject the current government and society, running diagonally across North America from Alaska to Florida.

This isn’t the first time MacKenzie has been in trouble with the law in Nova Scotia.

He was arrested in January after police say they seized several guns and ammunition from a home in Pictou County.

Inverness RCMP launched an investigation on Jan. 10 after a video that appeared to show a man waving a handgun inside a business was posted on social media. Police say the man also appeared to have a magazine that was over capacity.

Police determined the incident happened in Whycocomagh, N.S., and the investigation led them to a home on High Street in Pictou, N.S., where they executed a search warrant on Jan. 26.

Police say they seized five restricted firearms, including rifles and handguns, one unrestricted firearm, prohibited magazines, ammunition, body armour, a duty belt with attached holster, and magazine pouches and cellphones during the raid.

According to court documents, MacKenzie is facing the following charges in connection with the incident in Whycocomagh and seizure in Pictou:

MacKenzie is due to appear in Port Hawkesbury provincial court on May 30 to answer to those charges.

Two children are dead and six others are injured after a Laval city bus crashed into a daycare Wednesday morning. The driver of the bus, a 51-year-old man, has been arrested and faces charges of homicide and dangerous driving, police say.

The Bank of Canada released a summary of its Governing Council meetings on Wednesday, providing the public and financial institutions with more insight into the central bank’s decision to raise its key interest rate on Jan. 25.

Netflix Canada says it will begin notifying subscribers today about new limitations around password sharing outside their households.

An 'awkward' attempt at a handshake between Alberta Premier Danielle Smith and the prime minister Tuesday is another example of leaders from the western province hesitating before shaking Justin Trudeau's hand, say political experts.

Inflation has eroded purchasing power for many Canadians, but the experience with rapidly rising prices has been far from uniform.

The sacrifices female killer whales continue to make for their sons well after they are weaned is negatively affecting their reproductive health, according to new scientific research.

Turkiye-Syria earthquake: How to give to rescue and recovery efforts

In the aftermath of the deadly earthquake that struck Syria and Turkiye, Canadians are donating money and supplies to rescue and relief efforts there. CTVNews.ca rounds up ways you can contribute to charities based in Canada and abroad.

An associate of Ontario’s self-described “crypto king” was operating his own fraud scam parallel to the multi-million dollar Ponzi scheme, court documents allege.