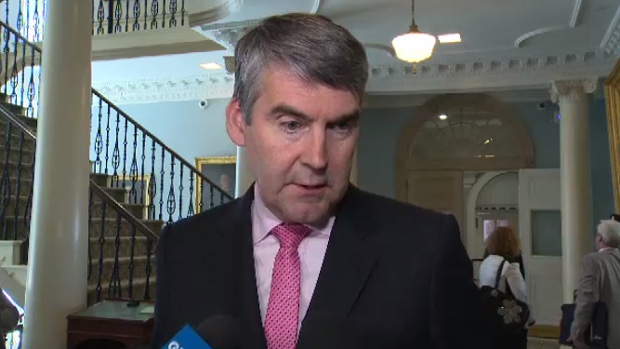 HALIFAX -- Nova Scotia's premier distanced himself Thursday from a government legal brief that implied members of a First Nation band are a conquered people.

The brief was presented as part of the government's case in an appeal of its approval of a plan by Alton Gas to store natural gas in salt caverns near the Shubenacadie River.

In the appeal hearing that wrapped up Tuesday before the Nova Scotia Supreme Court, the Indian Brook band argued that the province had a duty to consult with it on the project.

The government brief said the Crown's obligation to consult extended only to "unconquered people," and that the band's submission to the Crown in 1760 negated its claim of sovereignty and negated government's constitutional duty to consult.

Premier Stephen McNeil, who is also minister of aboriginal affairs, said the government's intent was to show in court that it did consult with the band.

"I believe that brief went way beyond where it needed to go," said McNeil. "I am looking for an explanation from the (Justice) Department."

McNeil also said he believes the provincial government has an obligation to consult with First Nations when it comes to major project proposals.

"All we should have been doing is talking about the work we did, it had nothing to do with any treaty or what happened in 1700. I believe Sipekne'katik (Indian Brook) should be upset ... and I will be speaking with them and seeing chiefs next week."

Justice Minister Diana Whalen said there are a "myriad" of court cases being dealt with by the department at any one time and she doesn't look at all of them.

Whalen said she didn't sign off on this particular legal brief.

"I'll be asking more about what the process is and to be sure that we are more sensitive because this has a big implication clearly. We value our relationship with the First Nations and it is not what we as a government . . . would have wanted to be the major argument."

Naomi Metallic, chair of aboriginal law and policy at Dalhousie University, said she is happy to hear the premier publicly distance himself from the government's court argument, but she wonders how the brief slipped through the Justice Department in the first place.

"Somebody I would assume higher up at some point had some clue about what was in here (the brief)," Metallic said. "Why wasn't this caught earlier and what are they going to do about it in the future?"

The proposed project would create two massive natural gas storage caverns near Stewiacke, N.S., by using large amounts of river water to flush out the salt. The brine would then be released into the river system over a period of two to three years.

The province granted approval in January and subsequently dismissed appeals from six groups including the Indian Brook band, which then took the case to the province's supreme court.