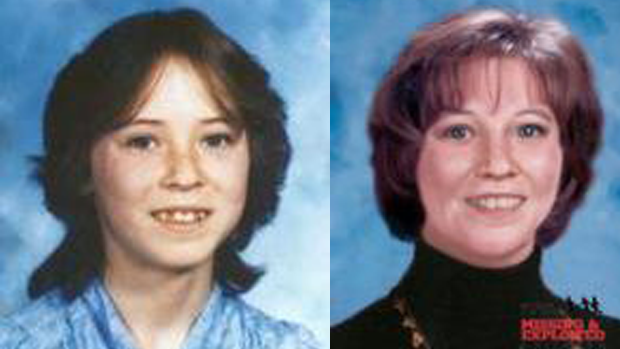 SAINT JOHN, N.B. -- Forty-eight hours before her 16th birthday, Kimberly Ann Amero vanished without a trace. It was a September night in 1985, and the Saint John, N.B., teen was at a fair in the city's east end.

"Kim was a social butterfly, always bouncing, always energetic," says her sister, Tammy Cormier Raynes, who was there the night Kimberly went missing but left early. "She told her friends 'I'll be right back,' and we've never heard anything since."

Thirty-two years after the freckled girl with dark blond hair and blue eyes was last seen, her disappearance continues to haunt her family, baffle police and dishearten residents of this tight-knit New Brunswick city.

Now, after a true-crime podcast renewed interest in the cold case, an amateur sleuth has dedicated himself to finding the teenager.

"The mystery of what happened to Kimberly continues to wear the family down," says Joseph Worden, who has spent countless hours combing through old newspapers, property records, aerial photographs and maps.

"They've been missing a loved one for 32 years. They've never been able to grieve."

Family members say her disappearance was first treated as a runaway case, and that the decades-old investigation has been marred by misplaced evidence and limited police resources.

Podcaster Jaymee Splude sums it up: "The Ameros aren't from the right side of town. They aren't an Irving or an Oland. No one was kicking up a stink."

While the fate of the 15-year-old continues to elude police, investigators have tracked down promising leads over the years. A notorious serial killer once confessed to her death but a thorough search of the Kingston Peninsula -- a piece of land located between the St. John River and the Kennebecasis River where Michael Wayne McGray has said her body was buried -- yielded nothing.

More recently, a local man anonymously sent the Amero family a letter and audio recording with disturbing details about her alleged kidnapping, captivity and murder. It's that recording that Worden, the self-styled sleuth, went to court recently to obtain.

Court documents reveal alleged details on the tape, including "her abduction, horrid captivity, attempted escape, subsequent murder and the location of her buried remains," Worden says in a letter to a local police chief filed in court.

"He gives specific community and road names, describes structures and directions in the forest."

In a near cinematic twist, the family stumbled upon the identity of the man who recorded the cassette in 2009.

In their attempt to search for her remains, they went knocking on doors in Upham, N.B -- a rural area about 45 minutes from Saint John where the tipster said she was buried. "I knocked on this man's door and he just says 'I've been waiting for years for this,"' says Cormier Raynes, Kimberly's sister.

The man went out to his truck, reached into his glove compartment and pulled out a name scribbled on a piece of paper, she says.

"He tells me that a few years back he was at the Irving having a coffee and chatting with some guys when he mentions hunting up near his home in Upham," says Cormier Raynes.

"All of a sudden this guy pipes up out of nowhere, 'Isn't that where that missing girl Kim Amero went in and never came out?"' The man was shaken up by his comment, and jotted his name down when he got back to his truck.

Kimberly's family recognized the name and -- not surprising in a small town -- knew the man's daughter. They asked her to listen to the tape, and she identified his voice, says Cormier Raynes.

The family realized that Kimberly had babysat for the man the summer before she went missing, and that he lived near the fair. "You could literally throw a tennis ball from his front lawn onto the exhibition grounds," says Ed Amero, Kimberly's brother. "I definitely think he had something to do with it."

It could also rule out the tip altogether, he admits, noting that he's also reached out to the serial killer and is researching other leads. "I just want to make sure no stone has been left unturned," Worden says. "That tape was the first real lead the family received since her disappearance."

But Justice William T. Grant of the New Brunswick Court of Queen's Bench ruled in his decision on Feb. 13 that although Worden may have the "noblest of motives," his request could interfere with police work -- a sentiment shared by the Saint John Police Force.

Indeed, although three decades have passed since the five-foot-six and 115-pound girl disappeared, police are "always trying to advance this file," Hayes says. "There is a team of three officers right now. It's all about processing information, going back and seeing if you can shine a different perspective on that information."

He adds: "As a police officer and as a police agency, we struggle when we don't get the bad guy. We're always trying to find answers. This is a very difficult and sad case that's been open and ongoing through the years."

Worden says he respects the judge's decision not to release the tape. But he says if the recording is that valuable, the police should act on it.

He said he'd like for police to take a closer look at the Upham property, where he said records and aerial maps show a cabin burned down a month after Kimberly went missing.

"There are all kinds of places to easily hide a body."

Meanwhile, the Amero family continues to push for answers in the unsolved mystery.

"It has at times destroyed us," said Ed Amero. "We've got back up but we've all been down for the count quite a few times."

-- By Brett Bundale in Halifax