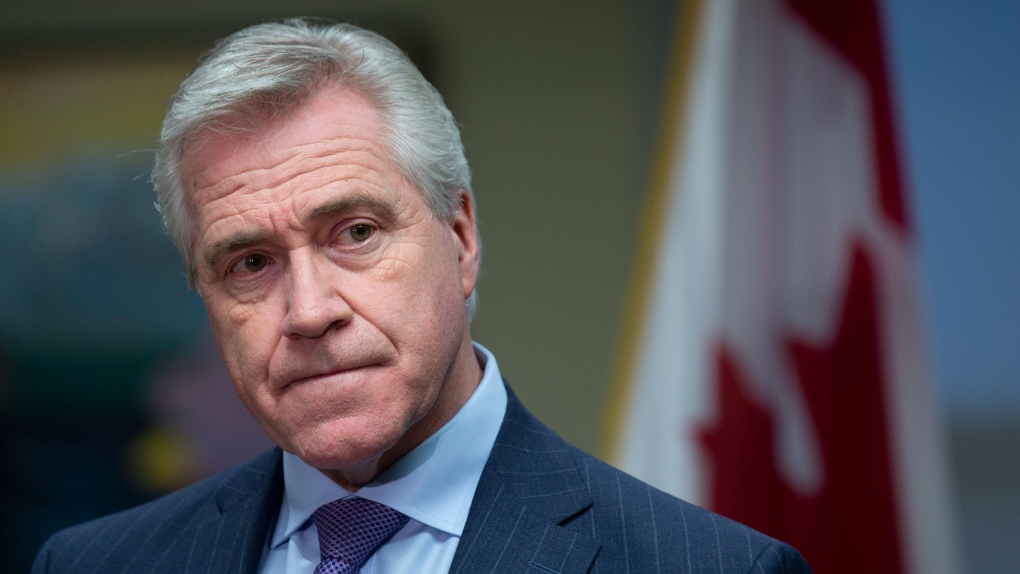 ST. JOHN'S, N.L. -- As he prepares to step down as premier of a province facing what has been described as a fiscal crisis, Newfoundland and Labrador's Dwight Ball says he feels "great" about his record and the foundation he has left for the next leader.

"I'm not walking away when it gets too hard. If that was the case, I would have been gone a long time ago," Ball said in an interview Tuesday with The Canadian Press.

"The next leader will find this province in much better shape ... than it was in 2015."

The premier announced his intention to resign in a recorded video released Monday night, after more than four years leading the province. He was re-elected last May with a minority government.

The surprise announcement came as the province grapples with mounting public debt and a rising cost of living and with his Liberal government buffeted by successive scandals. But Ball, 63, provided little additional enlightenment Tuesday on what triggered his decision.

He said he began considering the move over the Christmas holidays, motivated by a desire to spend more time with his family on Newfoundland's west coast. He said he was not asked by his party or caucus to step down.

Elected premier in 2015 after three years as leader of the official Opposition, Ball said he couldn't commit to running in the next election and wanted to make sure a new leader was in place soon, given the unpredictability of election timing in a minority situation.

Ball said he will stay on as the representative for his Humber-Gros Morne district until the next election and has asked the president of the provincial Liberal party to begin the leadership process. He said he will ensure a smooth transition for his successor.

"I'm not going anywhere. I think there's this perception out there, which is just false, that I'm leaving," he said. "I am staying on as the MHA and supporting the new leader, just in a very different role."

The premier also repeated his commitment to mitigate electricity rates expected to skyrocket when the over-budget Muskrat Falls hydroelectric dam comes online. On Feb. 10, the federal and provincial governments announced they would rework the financial structure of the project to redirect some benefits to ratepayers.

The $12.7-billion dam, which Ball himself has called the biggest economic mistake in the province's history, has essentially doubled in cost since it was approved under a previous Tory government in 2012, and its current structure would require ratepayers to make up the difference.

Though last week's announcement was criticized for being light on details and legal commitments from Ottawa, Ball said he's confident the plan will work and rejected the idea that his departure as premier would disrupt negotiations.

The premier also defended his unconventional choice to resign by video rather than at a news conference, saying he wanted to make sure his message was heard before speaking to the media in interviews Tuesday.

Stephen Tomblin, a recently retired political science professor from Memorial University of Newfoundland, said Tuesday he was surprised it took this long for Ball to resign.

Tomblin said the choice to resign over video was characteristic of Ball's style of governance, which he described as controlled and image-focused.

"It was always about the brand, but there wasn't a lot of substance in terms of what he was doing, and I think that irritated people," Tomblin said by phone.

He said the public was growing frustrated with the premier's optimistic rhetoric and apparent denial of the reality of what Tomblin called a "fiscal crisis," which was reflected when voters reduced Ball's government to a minority last spring.

Ball's government has also faced a number of scandals for which cabinet ministers took the fall, which Tomblin said may have undermined the premier's support within the party.

Two ministers were ousted from caucus in 2018 after harassment allegations surfaced from other elected members, and another minister was reprimanded last year for breaching conduct rules by facilitating the hiring of a former Liberal staffer to a high-paying public service job.

When it was revealed last spring that time had run out to mitigate risks from potential methylmercury contamination in food supply downstream from the Muskrat Falls dam -- a commitment Ball had made to Indigenous leaders -- he shifted responsibility to the Municipal Affairs and Environment Department.

"I don't think he had a lot of trust," Tomblin said. "The team was not really a team."

Tomblin said finding a replacement will be a hard sell with the various challenges and tough decisions likely ahead, but the conditions could attract a change-maker.

"There's a variety of issues or problems, but that also provides an opportunity if you can find a leader who is inspired, who does have the skill sets and has the ability to turn this around," he said.

John Allan, president of the Liberal Party of Newfoundland and Labrador, said in a statement Tuesday that details of the leadership process would be confirmed in the next few days.