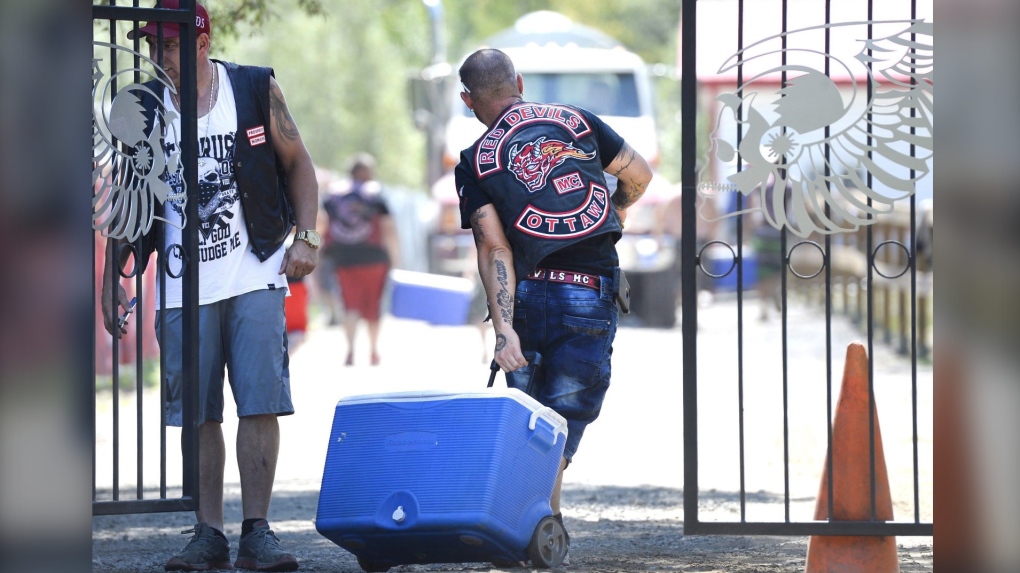 Nova Scotia RCMP say they will be monitoring a large gathering of outlaw bike gangs on Saturday in the Annapolis Valley. A member of the Red Devils motorcycle club carries a cooler into the the Hells Angels Nomads compound before the group's Canada Run event in Carlsbad Springs, Ont., near Ottawa, Friday, July 22, 2016. (THE CANADIAN PRESS/Justin Tang)

HALIFAX -- RCMP say they will be on hand for what's expected to be a large gathering of outlaw biker gangs in Nova Scotia's Annapolis Valley on Saturday.

The Mounties tweeted Friday to advise motorists they will be conducting road safety checkpoints in the Wilmot, N.S., area.

Cpl. Jennifer Clarke, a spokeswoman for the force, said the biker gathering is being hosted by the Darksiders club which has a chapter in the area.

"We don't believe there's any risk to public safety, but we do feel we should warn the public that we will be in the area doing increased traffic enforcement," said Clarke.

Clarke couldn't say how many bikers would be attending the event but added police believe members of the Hells Angels, Bacchus, and the Red Devils -- a Hells Angels affiliate group -- would be in attendance. She wouldn't say what police know about the meeting.

"The information that we have is they are meeting, the RCMP is obviously aware of that and is taking steps to mitigate that the best way we can," Clarke said.

The Red Devils, considered the top so-called puppet club of the Hell's Angels, have chapters in Moncton, N.B., and Halifax.

In addition to the Darksiders, who also have a chapter in Dartmouth, Nova Scotia has a series of other outlaw gangs including Sedition clubs in Fall River and Weymouth, and Highlanders clubs in Antigonish, Pictou County, and Cape Breton.

The only group of one percenters -- the top tier of outlaw bikers -- in Nova Scotia is the Bacchus Motorcycle Club, although the Hells Angels have been attempting to re-establish a presence in the Maritimes for nearly three years. The two organizations appear to have reached a detente.

Bacchus was declared a criminal organization in a July 2018 ruling by the Nova Scotia Supreme Court. The ruling was seen as putting a damper on the gang's activities because it established tougher sentencing for any crimes carried out to benefit the club.

This report by the Canadian Press was first published Sept. 20, 2019.