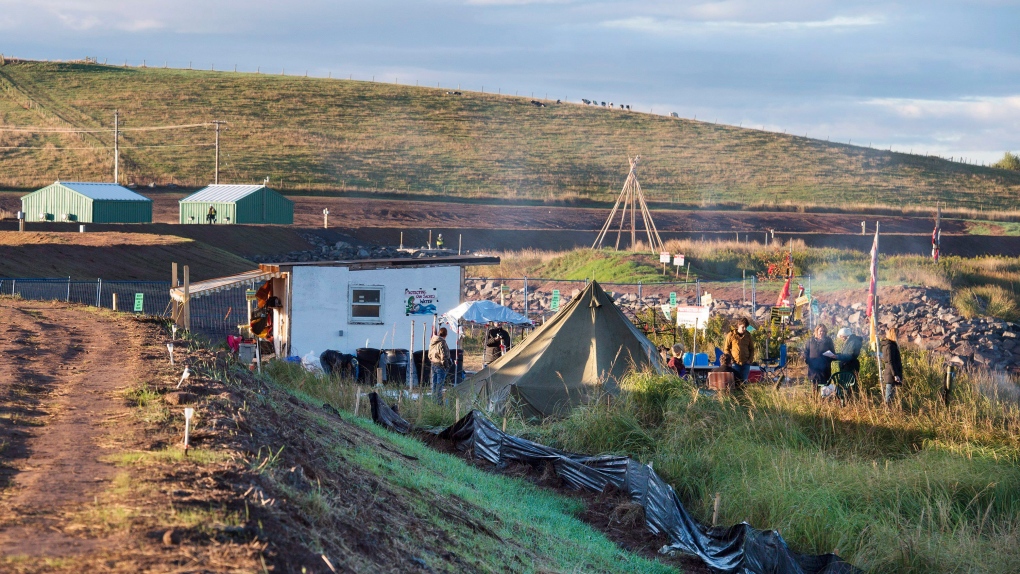 A Mi'kmaq camp is seen on the shores of the Shubenacadie River in Fort Ellis, N.S. on Monday, Sept. 26, 2016. Alton Natural Gas Storage LP plans to build natural gas storage caverns in salt beds nearby. (THE CANADIAN PRESS/Andrew Vaughan)

HALIFAX -- A review of a controversial Crown brief that implied the Mi'kmaq are a conquered people is now complete, but Nova Scotia's justice minister refused Wednesday to divulge its contents.

"I've seen the report and I'm not able to give any information about it," Diana Whalen said after a cabinet meeting. "It's got a lot of legal and personnel information in it."

Late last year, the band argued that a plan by Alton Natural Gas Storage to create storage caverns near Stewiacke poses an environmental risk to the nearby Shubenacadie River.

They objected to the government's legal brief, which argued the province's duty to consult on such issues extended only to "unconquered people."

The Mi'kmaq also drew attention to the fact that Cameron had written a book in 2009 that attacked the Supreme Court of Canada's landmark Marshall decision on aboriginal fishing rights.

The Justice Department subsequently removed Cameron from the case.

Premier Stephen McNeil later apologized to Mi'kmaq chiefs and distanced the government from the legal position, saying it didn't reflect the government's view that it has a duty to consult on issues of importance to First Nations.

The offensive section of the brief was also removed from the government's argument.

Whalen said the review does have some ideas that could change the way things are done in her department, but she wouldn't elaborate.

However, she confirmed the report did not discuss the actions of any elected officials.

When she announced the review last fall, Whalen said it would look at how justice files are generated and how they are reviewed within the department.

In a written decision released in January, a provincial Supreme Court justice quashed the province's rejection of the band's appeal of the Alton project, saying the band was denied procedural fairness.