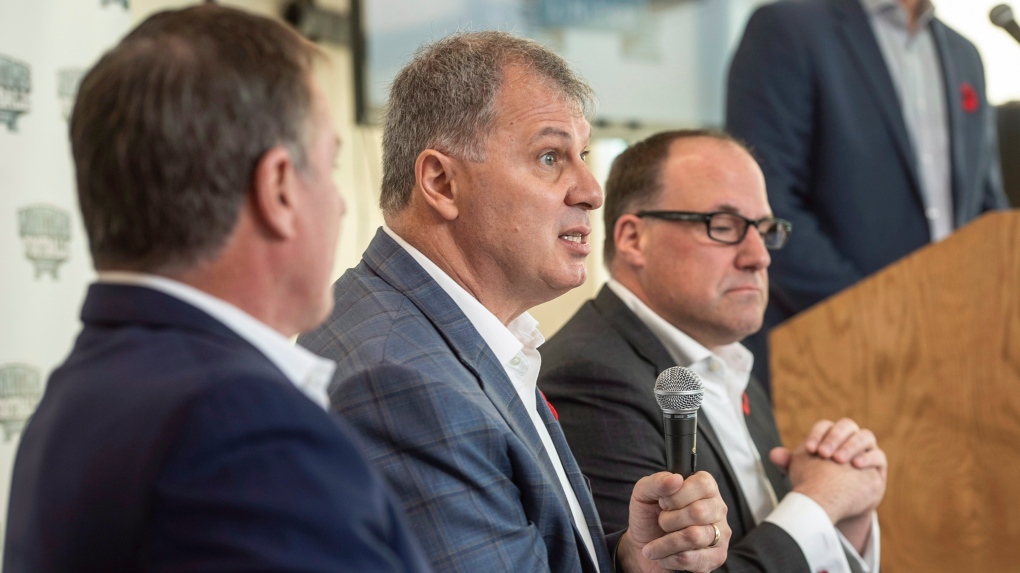 HALIFAX -- The contest to name Halifax's proposed CFL team appears to be a "horse race" between Atlantic Schooners and Atlantic Storm, according to a businessman trying to land a franchise for Atlantic Canada's largest city.

In an interview, Anthony LeBlanc of Maritime Football Partnership wouldn't say what name has the upper hand, although many believe Schooners is the odds-on favourite to be announced Friday at an event during Grey Cup festivities in Edmonton.

"I'm surprised that it is as close as it is," LeBlanc said of the contest.

People who have laid down season ticket deposits have also had the opportunity to submit their own team names, and at least two -- Privateers and Destroyers -- proved intriguing, said LeBlanc.

He said Privateers was a particular favourite, although it ultimately can't be used.

"Unfortunately it (Privateers) has already been secured by the lacrosse team that is coming to town," he said.

The exclusive contest is part of a season ticket drive launched two weeks ago.

LeBlanc said his group has received more than 5,000 deposits to date, which for $50 places fans on a priority list for season ticket membership and seat selection on a first-come, first-served basis.

"When you factor in the notion that we have not done any paid marketing to date it's a pretty phenomenal number," said LeBlanc. "I met with the CFL Board of Governors last week and they were happily surprised with the results."

He has previously said it is important to get a "nice base" of season ticket holders to help fill a proposed 24,000-seat stadium, and he feels 12,000 is an achievable goal.

For its part, the Canadian Football League has said it has no minimum number of season tickets it wants to see.

The partnership's efforts to land a team cleared a major hurdle last month after Halifax Regional Council directed city staff to do a business case analysis of the group's stadium proposal. The partners have proposed vacant land in Shannon Park on the east side of Halifax harbour as the stadium site, and say the $170-million to $190-million project would need public money.

LeBlanc said his group met last week with the municipality's chief administrative officer, Jacques Dube, and other senior staff to "go over concepts and ideas."

He said the goal is to present a package to Dube by early or mid-December so an analysis can be done of the proposed stadium funding model known as tax increment financing.

Under the proposal, the owners of the Shannon Park development would pay property taxes on the real estate, but that money would be set aside by the municipality and returned as a payment against the stadium's debt.

Other options are also being considered to help foot the overall bill, including an increase to the hotel marketing levy and a new car rental tax.

"The biggest issue, and nobody has shied away from this, is finding out what the level of risk is for each participant and what that acceptable level of risk is here," LeBlanc said. "Everyone has always said the same thing -- they want to see the numbers, so that's what we are working on."

A public consultation on the proposed stadium site will also likely begin in January, in conjunction with the current owners, the Canada Lands Company.

LeBlanc said it's hoped the results of the regional municipality's analysis would be available by early spring.

Friday's team-name announcement in Edmonton with CFL commissioner Randy Ambrosie is scheduled be simulcast at the HFX Sports bar in Halifax at 9 p.m. local time.

"I don't think it will be a contentious night," said LeBlanc. "Of course everybody has their opinion on what the team name is going to be. Hopefully everybody embraces it and just has fun."