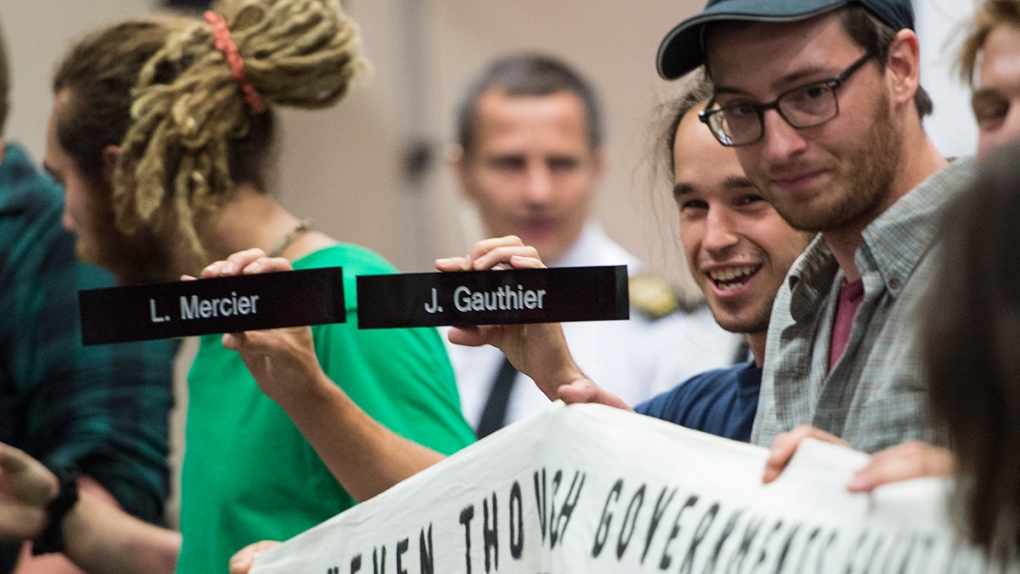 A demonstrator holds up the name plates of two of the commissioners as they disrupt the National Energy Board public hearing into the proposed $15.7-billion Energy East pipeline project proposed by TransCanada, in Montreal, Monday, Aug. 29, 2016. (Paul Chiasson / THE CANADIAN PRESS)

MONTREAL -- All future National Energy Board hearings into the Energy East pipeline project will be suspended until the board rules on motions demanding two panel members resign, the federal agency announced Tuesday.

The board received the motions after a news report revealed the two members met in early 2015 with ex-Quebec premier Jean Charest, who was at the time a paid lobbyist for TransCanada, the company behind the project.

"Given that the board has invited written comments by Sept. 7, 2016 on these motions, the board will not proceed with further panel sessions until it reaches a decision," it said in a statement.

NEB panel members are supposed to be independent and are tasked with overseeing the public hearings and preparing a final report for Parliament on whether the government should go ahead with the project.

The federal regulatory body has been heavily criticized by many politicians and activists in Quebec who claim it is in a conflict of interest due to the revelations two of three people presiding over the public review sessions met with Charest.

On Monday, protesters stormed a conference room in Montreal minutes before the public hearings were scheduled to take place, forcing the NEB to cancel the day's events.

The regulator also ditched Tuesday's panel sessions "as a result of a violent disruption on the first day of proceedings and ongoing security concerns," the statement said.

Coderre, who has come out against the pipeline, suggested strongly the NEB review process had the perception of bias and that TransCanada has failed to satisfy local concerns about safety and emergency preparedness plans in case of spills.

TransCanada (TSX:TRP) said Tuesday the company "will wait for the NEB to provide guidance on how it plans to proceed."

The company has proposed the $15.7-billion pipeline to transport crude oil from Alberta to New Brunswick.

Former BC Hydro CEO Marc Eliesen said the NEB is suffering from a "petro culture" and that its review process is "biased and non-objective."

Eliesen dropped out as an intervener during the NEB's review of Kinder Morgan's Trans Mountain pipeline expansion proposal in 2014, calling the process "a farce."

"I thought the kind of decision-making involved was done with such a bias and lack of objectivity," he said in an interview from Whistler, B.C. "I believe the whole nature of the hearings for Trans Mountain was a farce and I think this was continued with the Energy East proposal."

Prime Minister Justin Trudeau recently created a National Energy Board "modernization panel" he said would recommend to Parliament, by January 2017, ways to improve the review process.

In the meantime, he imposed "interim" measures on the current NEB, such as "deeper consultations" with stakeholders, in order to try to ensure the review body is seen as more legitimate.

Eliesen called the measures "a joke."

He said the NEB's two panel members should "absolutely" resign.

Natural Resources Minister Jim Carr said it's not the federal government's role to make a decision regarding NEB panellists, who are supposed to be independent.

"I think the National Energy Board is going to have to deal with the situation," he said in Calgary. "They have guidelines, they have the statute that governs how they do business. They are an independent group. I'm sure they are looking at it very seriously and we'll await to see how it is resolved."

Meanwhile, Alberta's energy minister said the disruptions at the Energy East hearings in Quebec were disconcerting and a hindrance to the debate.

But Marg McCuaig-Boyd said Alberta is determined to move forward and will work harder to reinforce its message on the importance of getting oil to the coasts to ship to overseas markets.

"We're just going to keep doing what we're doing," McCuaig-Boyd said. "It's working. I'm hearing from companies all the time that our climate leadership plan is helping the discussion."

Jack Mintz, an Imperial Oil board member and President's Fellow at the University of Calgary's School of Public Policy, said if the two board members spoke with Charest, "I think that does raise an issue and they shouldn't have done it."

However, he said he doesn't believe the NEB is facing a crisis of legitimacy.

"Supposedly you change the NEB and bring in a better regulatory system -- will this stop certain groups from trying to stop any oilsands pipeline from being built?" he asked. "I guarantee it won't have any impact at all; they will still be disruptive."