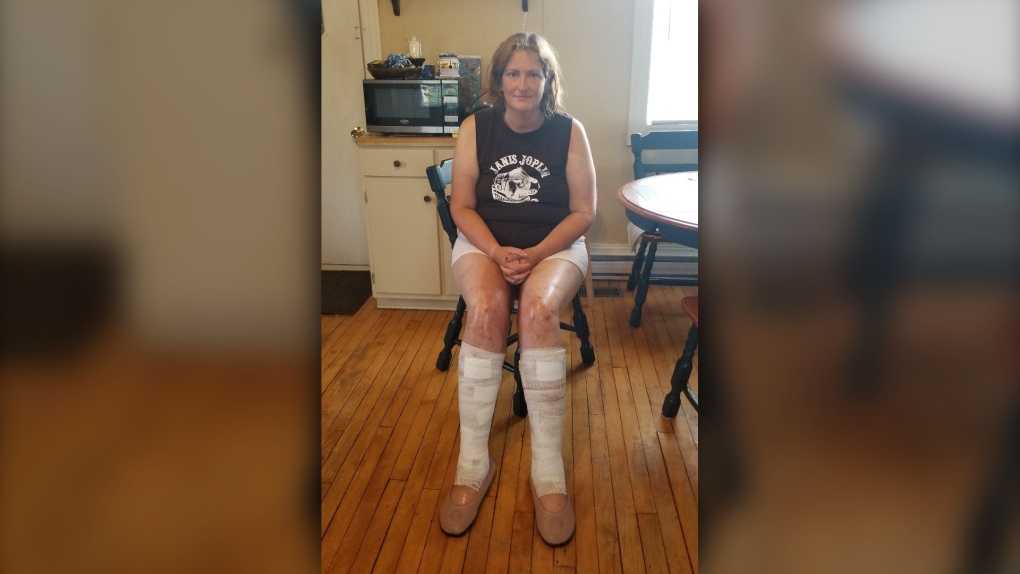 Jenny McLaughlin is shown at her home in Saint-Isidore, N.B. on Thursday, July 30, 2020 in a handout photo. McLaughlin says she was able to survive in woods northeast of the province for nearly two weeks by drinking rainwater from puddles and eating wild berries. THE CANADIAN PRESS/HO-Jenny McLaughlin MANDATORY CREDIT

TRACADIE, N.B. -- A New Brunswick woman says she was able to survive in woods in the northeast of the province for nearly two weeks by drinking rainwater from puddles and eating wild berries.

Jenny McLaughlin, who was rescued Tuesday, said her need to see family and loved ones gave her the strength to keep going after she got lost in the woods after dark.

"I survived basically off of rainwater and puddle water," the St-Isidore, N.B., woman said Thursday by text message. McLaughlin said she did not want to be interviewed by phone.

She said she scavenged for "anything I could find basically, and was lucky there were orange wild berries ... to eat around the fourth, fifth day."

"I found shelter in the trees where I could but had no phone or lighter for support or to depend on," she wrote.

McLaughlin was reported missing July 17, triggering an intensive search by the RCMP. The next day, searchers found her vehicle at an ATV trail in Rough Waters, N.B., about 220 kilometres north of Moncton. Her cell phone was found in woods last Saturday, but there was no sign of the woman until she was found late Tuesday by linemen doing maintenance for NB Power.

East Coast Powerline wrote on Facebook Wednesday that its workers were moving locations by helicopter when they made the discovery.

"The quick-thinking lineman immediately called for help and notified the rest of the crew."

"Those workers did an outstanding job to stabilize her, to put her on a stretcher and give her first aid," he said Thursday. "It was a really rough terrain, a lot of swamps, a lot of dead wood."

Plourde said rescuers had to carry the woman 1.3 kilometres to the closest trail accessible by ambulance. "We had to do it with her on a stretcher and us walking because there was no way to evacuate her by helicopter, or with an ATV, because the terrain was too rough," he said.

Both RCMP and McLaughlin declined to say why she was in the woods when she became lost.

Plourde said police believe she walked in circles for the last few days of her ordeal.

McLaughlin said she knew there were wild animals nearby and was frightened.

"I saw signs of bears yes, the markings and the scrapes on the trees, the droppings ... could sometimes hear them and the coyotes (or fox) not too far ... really scary but had to keep going," she said.

She was treated in hospital for her injuries, which included a sunburn and scraped ankles, and is recovering at home.