Michael MacDonald and Michelle McQuigge THE CANADIAN PRESS
Published Thursday, May 12, 2016 7:38AM ADT 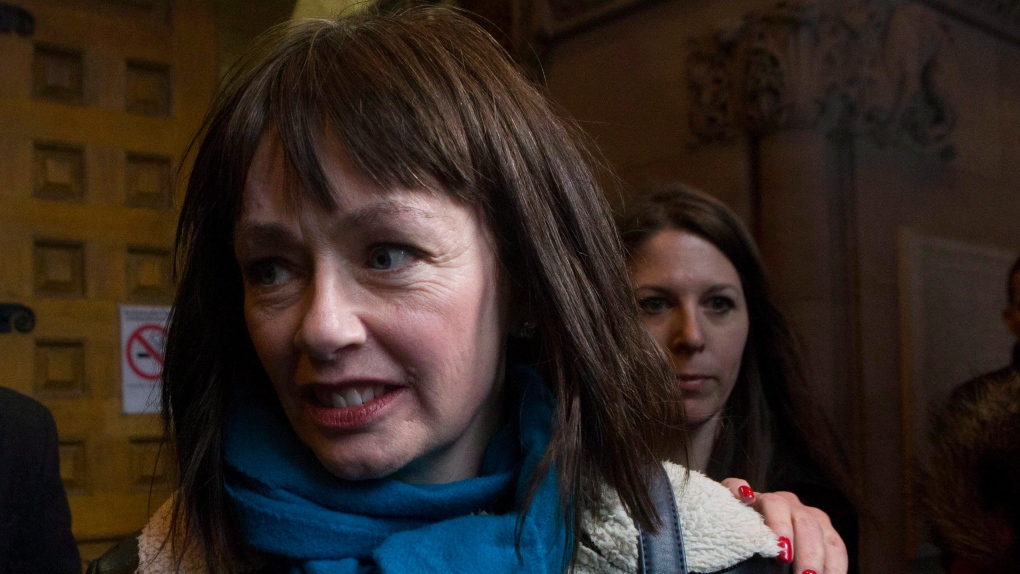 In this file photo, Lucy DeCoutere leaves the Toronto courthouse following the reading of the verdict in the Jian Ghomeshi sexual assault trial on Thursday, March 24, 2016. (Chris Young / THE CANADIAN PRESS)

One of three women who accused Jian Ghomeshi of sexual assault outside his workplace says they were never given the option of seeking a peace bond instead of testifying during the radio celebrity's sensational trial earlier this year.

"This wasn't an avenue that we could pursue because it was never offered to us," Lucy DeCoutere said in an interview with The Canadian Press in Halifax. "I never knew that a peace bond was available."

Ghomeshi signed a peace bond -- which the judge said was not an admission of guilt -- and publicly apologized Wednesday to former CBC colleague Kathryn Borel, who had accused him of sexually assaulting her at work in 2008. The Crown subsequently withdrew a charge of sexual assault, for which Ghomeshi was slated to stand trial next month.

DeCoutere, a former "Trailer Park Boys" actress, said Crown lawyers spent very little time talking with her and the two other complainants before his original trial in February.

"It was quite clear that my preparation was limited," she said. "There was no collaboration."

DeCoutere said the peace bond process allowed Borel to avoid being subjected to the intense public scrutiny of a trial and a withering cross-examination by Ghomeshi's lawyer.

Under Marie Henein's blistering questioning, inconsistencies and contradictions emerged in the accounts offered by DeCoutere and her two fellow complainants.

Justice William Horkins, who presided over the trial, later questioned the honesty of all three women as he acquitted Ghomeshi on charges of sexual assault and choking.

DeCoutere said she was glad Borel was spared the ordeal, echoing an opinion shared by women's advocacy groups.

Pamela Cross, legal director of Luke's Place Support and Resource Centre, an Oshawa, Ont.-based group helping survivors of violence, said Wednesday's developments left her feeling more positive than the end of the trial at which DeCoutere was a star witness.

But she said that relative optimism is tempered by the fact that systemic flaws still remain in a justice system that's ill-equipped to handle allegations of sexual assault.

"I think the difference is seeing Kathryn Borel in front of the court house, standing strong, and reading a statement in which she has made it clear that this was a better outcome for her than the alternative of going ahead with a trial," she said. "What continues to make me angry is that women are so often viewed with such suspicion and disbelief when we talk about sexual violence. That has to change."

On Wednesday, Ghomeshi described his behaviour toward Borel as thoughtless, sexually inappropriate, demeaning and an abuse of his power as a famous star.

DeCoutere stressed that Ghomeshi's apology did not shed any light on his conduct outside his workplace, adding his expression of "deep regret and embarrassment" only related to one specific incident.

The situation highlights one of the concerns some advocates have with peace bonds as a tool for resolving sex assault complaints.

For Tamar Witelson, legal director of Toronto's METRAC Action on Violence, that approach does not do much to address the underlying issues.

The terms of the bond ban Ghomeshi from having any contact with Borel for a maximum of 12 months and bar him from owning any weapons.

Witelson questioned whether such an approach does anything to advance awareness of sexual assault and what kind of message it sends society at large.

"The larger public remedy I'm not sure is very well addressed by this outcome," Witelson said. "I still think the general public doesn't really understand what sexual assault is after these two episodes in criminal court with this particular accused."

The peace bond resolution and Ghomeshi's subsequent apology did not satisfy DeCoutere, who said his words of contrition meant little to her.

"Frankly, apologies, for me, fall flat," she said. "I always want to know why somebody did something and I want a guarantee that it won't happen again -- and why did it happen in the first place."