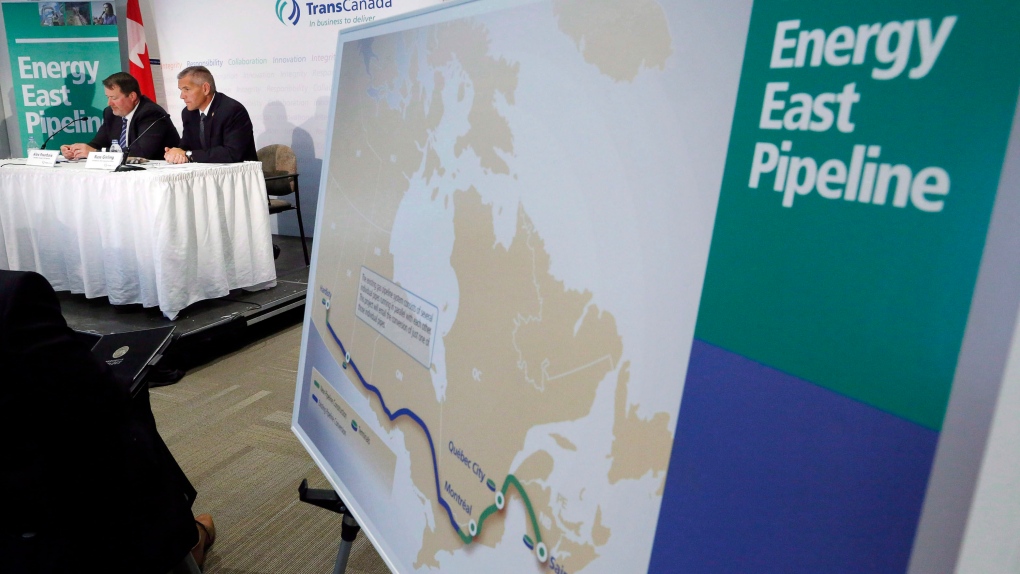 The Energy East pipeline proposed route is pictured as TransCanada officials speak during a news conference in Calgary, on Aug. 1, 2013. (The Canadian Press/Jeff McIntosh)

The Calgary-based company is aiming to link up to 1.1 million barrels a day of Alberta crude to export terminals and refineries in Quebec and New Brunswick through the $12-billion pipeline.

For about two-thirds of the way, an existing segment of cross-Canada natural gas pipe would be converted to oil service, with new pipe to be built through Quebec and New Brunswick.

TransCanada (TSX:TRP) filed its regulatory application to the National Energy Board in October.

Pushback against the project has emerged on various issues, including the need to protect a beluga habitat in Quebec's St. Lawrence River where plans to build one export terminal have been put on hold.

There are also concerns about the impact of the pipe conversion on gas consumers in Central Canada.

In an assessment released Wednesday, Quebec's energy board said petroleum shippers should assume the costs related to that aspect of Energy East because the project was conceived primarily with them in mind.

The Regie de l'energie added that distributors of natural gas should not be the only ones to pay for the gas-related portion of the pipeline.

They must "take into consideration the interests of consumers and businesses in terms of natural-gas prices," he said

The board estimates the demand for natural gas in Quebec will grow by about two per cent annually between now and 2030 and that the only reliable option is to buy gas from outside Quebec and bring it into the province via TransCanada's network.

It also stated that shale gas in Quebec and natural gas from Anticosti Island "cannot be considered reliable supply options...notably because of issues related to economic viability, the environment and social acceptability."

The energy regulator did not look into the route of the pipeline or study the potential environmental consequences of the project.

"Energy East will make available a stable and reliable supply of Canadian oil to eastern Canadian markets, including Quebec," the company said in a statement.

"We estimate the repurposing of gas transmission capacity will help save our gas customers $950 million over 15 years. Those are savings which we believe can be passed onto home and business gas consumers. We are pleased with the Regie's conclusion that Energy East is a desirable project in that regard."

A study by the Conference Board of Canada has concluded that more than 4,000 direct and indirect jobs will be created in Quebec during the seven-year planning and construction phases of Energy East.

The study also estimated the project will generate an additional $5.8 billion in the Quebec economy during construction and operation.