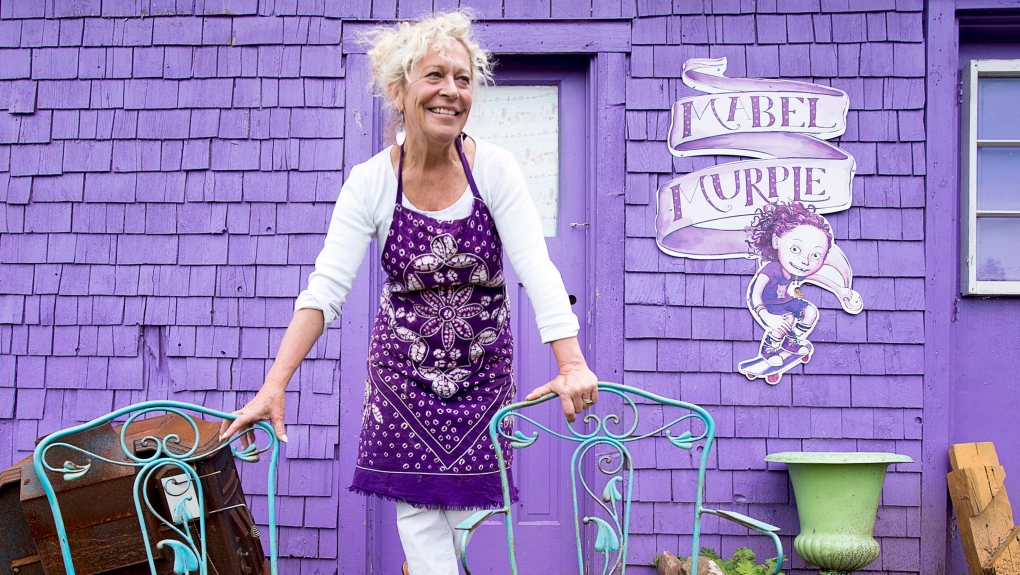 Writer, poet and educator Sheree Fitch is seen at her hobby farm Happy Doodle Do in River John, N.S., on Saturday, June 16, 2018. (THE CANADIAN PRESS/Andrew Vaughan)

At first glance, Mabel Murple's Book Shoppe & Dreamery is a "barn full of books and a pasture full of poop," Sheree Fitch, author, storyteller and bookstore owner, says with a laugh.

But beyond printed words and colourful books, reading nooks and grassy fields, animals and big oak trees, there's a land of make-believe where every sentence can start with "What if" and imaginations can soar.

"I wanted to open a space where people can come, sit down with a book, bring their bug spray, sunscreen, a clothes pin for the nose, and they can dream in this space," Fitch says of her unorthodox shop outside the village of River John, along the Northumberland Strait.

Located on an old farm populated by donkeys, sheep and scatterbrained hens and roosters, the tourist draw opened last summer in response to a rash of rural closures, including the village school.

"We didn't have a lot of money but I thought, 'What if it's not just about bottom-line dollar. We've got a beautiful property, let's open it up,"' Fitch says after a morning spent feeding barnyard animals.

And so her husband, Gilles Plante, converted an old grainery into a rustic bookstore with handmade shelves painted light green and purple.

They ordered a few boxes of books -- enough inventory to last the season, they thought -- and made three parking spots. They expected a smattering of supportive locals and a few come-by-chance tourists.

They ended up with three pastures full of cars and sold-out shelves on opening day.

For nine weeks, tourists and teachers passed through the barn's screen door, as did cottagers and daytrippers, and locals returning with each round of visiting relatives. Visitors brought picnic lunches and children ran through the grassy fields.

"They got out of their cars and stepped into a world away from the screens," says Fitch, whose playful stories and lively rhymes began with her first book, "Toes in My Nose," in 1987.

"They could sit and have an egg salad sandwich and lemonade and read a book."

Mabel Murple's became the little bookstore that could, selling local titles and championing Atlantic literary tourism as a valid industry.

The bookstore is on a back road in what some might affectionately call the middle of nowhere, a few turns off the province's famed Sunrise Trail.

It opens for its second season July 2 to host Read by the Sea's WordPlay Children's Book Festival, with readings by authors Paulette Bourgeois, Wesley King and Justin Gregg.

This time, mystery books and mind, body and spirit sections are being added to the collection of children's books, non-fiction, poetry and award-winning adult literature.

"We want to sell books but we also want to support local artists and create a destination," she says, adding that "we opened this for the community, but it was community that helped us build this."

Storytelling surrounded Fitch as a child growing up in New Brunswick when her father would dream up fanciful bedtime stories, while her mother filled the house with "tongue twisty" songs from the '40s.

In her 20s, while balancing the demands of being a single parent and pursuing an undergraduate, and later a master's, degree in English literature, Fitch began making up stories for her two young children.

"Most of those early books were really truly inspired by my kids," she says. "I had an audience I wanted to write for ... so many magical things happen in the world of childhood if you listen carefully."

Fitch has written dozens of stories for kids, young adults, adults and non-fiction educational books. Her latest book, "EveryBody's Different on EveryBody Street," is a children's book about mental health, human weakness and strength.

She's also spent years reading to children and advocating for literacy as a globetrotting educator, speaker and storyteller at schools, libraries and conferences from Nunavut to Bhutan before she put down roots on a dirt road.

At 61, Fitch doesn't appear ready to slow down. Plans are afoot to add a labyrinth in a nearby field, and to host school field trips next spring. She wants to open the ethereal property to children who might not otherwise have a chance to visit.

"We want this to be part of an old-fashioned summer vacation. There's something nostalgic about getting off the iPad, the iPhones, and just enjoying some good old-fashioned books, storytelling and picnics. I really believe eyeball-to-eyeball and face-to-face communication is what human beings need the most. It's called human interaction and it's essential to people's well-being and health."