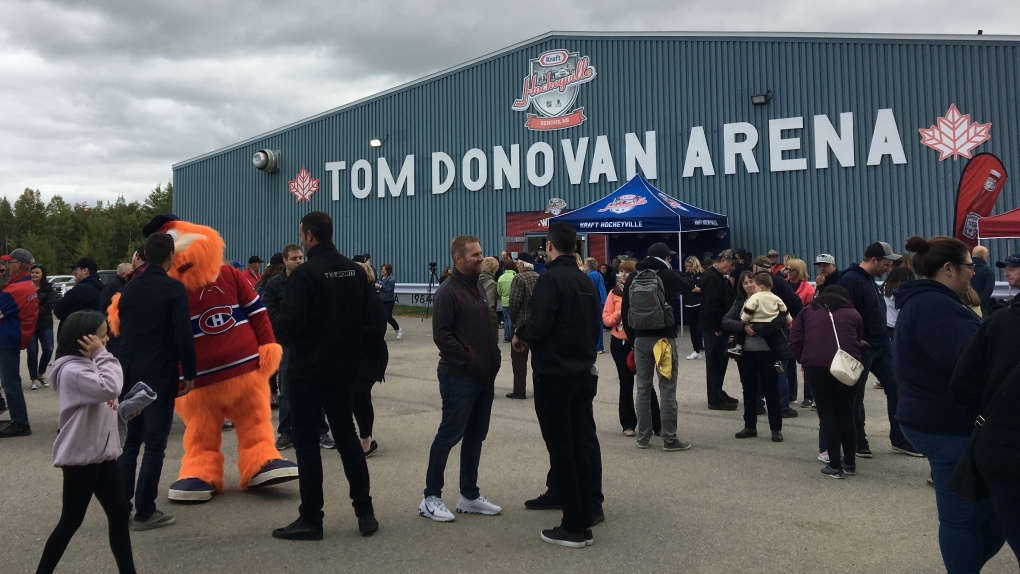 RENOUS, N.B. -- A tiny New Brunswick community, known mainly for its federal maximum-security prison, has been transformed into Hockeyville in celebration of the game -- and in memory of a young player who died too soon.

With a population of less than 750 people, Renous didn't even have a "Welcome" sign along the highway until recently. Motorists driving through would see the Atlantic Institution correctional facility and the Tom Donovan Arena, which has been showing its age in recent years.

Local Hockeyville chairman Zach Hallihan said the ice plant for the 34-year-old rink was at least 12 years beyond its expected lifespan, and efforts to raise funds for a replacement had not been very successful.

The community has also been struck by a string of tragedies, resulting in the deaths of a number of young people. Among them was 14-year-old Thomas Dunn -- killed in a dirt bike accident on the Canada Day long weekend in 2018. Talented in hockey and baseball, Dunn was well-known in the community as an athlete and all-around good kid.

"He was always smiling. He was polite. He'd do anything for you. If you needed him to pick up pucks, or garbage or anything, he was that kid who would do it," Hallihan said.

Hallihan said it was decided to make Dunn's story the basis of their application to Kraft Hockeyville, which every year gives one Canadian town money to upgrade its arena and the opportunity to host an NHL pre-season game.

Renous is so small, it didn't even appear as an option in the drop-down menu on the Hockeyville application web page.

But that didn't deter the growing number of people rallying behind Renous' application -- and in April it was announced they had won. For their efforts, the community will receive $250,000 for their rink.

"Since that point, the province has given us money. Local charities have given us money -- and businesses -- which has put us over $800,000 in donations towards our arena in eight months," said Hallihan.

The money has been used for major repairs and upgrades to the rink, including a new Zamboni room and ice plant, and a new girls' dressing room which had been crammed into a closet under the stairs.

On Tuesday, a community celebration was held. Former NHL players Yvan Cournoyer, Patrice Brisebois and Stephen Weiss signed autographs, and the Stanley Cup was on display.

"It's pretty awesome to have the Stanley Cup in Renous," said Shawn Underhill after posing with the cup along with his 10-year-old son Keenan. "It's a huge thing for this community."

Eleven-year-old twins Myles and Jack Curtis were getting a second chance to see the Stanley Cup after it made a visit to their school in nearby Blackville earlier in the day.

Renous gets to host a pre-season game Wednesday night between the Montreal Canadiens and the Florida Panthers. In order to accommodate the number of fans, the game will actually be played 120 kilometres away at the larger K.C. Irving Regional Centre in Bathurst -- the home rink of the Quebec Major Junior Hockey League's Acadie-Bathurst Titan.

"Over the last 18 months, there's been so much tragedy, but over the last six months there's not a person that goes around without a smile," Hallihan said. "Over the next couple of days ,we just can't wait to see how much more people are excited and want to be a part of this and such a cause in memory of Thomas."

"He was a great athlete and a great friend and a great teammate," she says fighting back tears.

On Tuesday, Dunn beamed with pride as she looked at the crowd that had gathered outside the rink in Renous.

"It has brought so many people together, and Tom loved to be around people," she said. "This rink is our lifeline. It's where everyone meets and greets."

Nancy Hallihan-Sturgeon, co-chair of the organizing committee, said Dunn's friends and classmates have been active in keeping his memory alive.

"You can't go anywhere without seeing people wearing shirts, jackets, or hats with the hashtag .neverdunn or T-6, which was Thomas' jersey number," Hallihan-Sturgeon said.

"He loved family. He loved winning. We see a touch of Thomas in everything we've done."