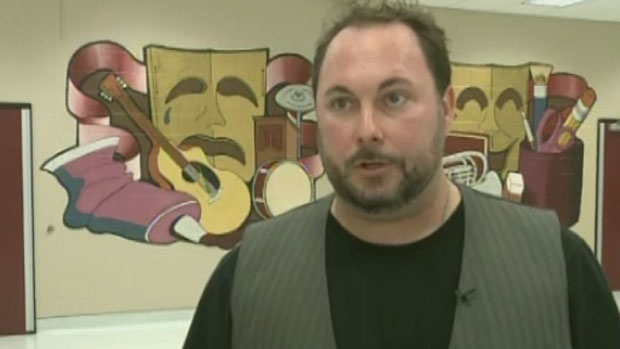 Art Moore is offering a $500 reward for the return of his prized guitar after it was stolen from his home and sold at a pawn shop. (CTV Atlantic)

A Moncton man is hoping to find his prized guitar after it was stolen from his home and then sold at a pawn shop.

“We got a call from the RCMP, so my fiancé and I went back to our house and our house had been broken into,” says Art Moore.

Thieves took Moore’s guitar – a gift from his fiancée – and some electronics, at a loss of about $7,000.

With the help of his neighbours, who spotted a suspicious couple in the area, Moore tracked the stolen items to a Moncton pawn shop.

Moore says the guitar is actually worth $4,000.

He also says the owner should have known the items were stolen, but Bill Roberts says he did nothing wrong.

“She produced her ID. It was her picture and it was her ID, so I took her ID and put it in the computer, which I always do, and I gave her $75,” says Roberts.

He admits he did have doubts about the sale when he noticed the woman was carrying a bag of alcohol bottles, and when she didn’t know the password to Moore’s computer, which she was trying to unload.

“It made me suspicious that she didn’t know the password, but then again, I deal with a lot of people and a lot of times people do forget their password,” says Roberts.

“What would a reasonable person do if a high-end guitar walked into their store, any instrument being carried by a girl with a bag full of alcohol bottles, and a computer she doesn’t know the password to?” asks Moore.

To make matters worse, Moore’s father is in the intensive care unit at the Moncton Hospital. He was visiting his dad when police called him about the break-in at his home.

As word of the robbery spreads, offers of help have come in from around the Maritimes, and from students at Harrison Trimble High School where Moore teaches and coaches rugby.

Moore doubts he will ever see his guitar again, but is offering a $500 reward for its return.