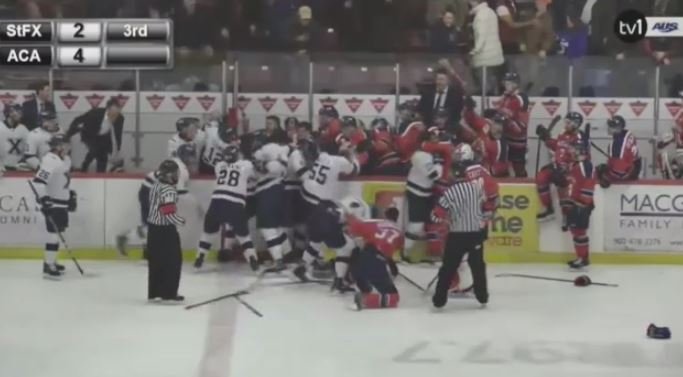 An Atlantic University Sport men’s hockey game in Wolfville, N.S. became heated as the Acadia Axemen and St. FX X-Men were involved in a brawl on Feb. 2, 2019. (YouTube)

HALIFAX -- More penalties have been handed out in an ugly brawl that cast a pall over university men's hockey in Atlantic Canada.

The teams' Feb. 2 brawl spread from the ice to both squads' benches, and was captured on video and circulated widely online.

Atlantic University Sport had previously handed automatic suspensions to six Acadia players and nine from the X-Men as well as both head coaches, ranging in length from two to five games, totalling 39 games.

In a release Tuesday, AUS handed out another 36 games of suspensions to five players and four coaches, which take effect immediately.

Acadia got the worst of the discipline handed out by David MacLean, the AUS men's hockey chair.

Three Acadia players received extra game suspensions, including Rodney Southam, who has taken responsibility for the comments that led to the bench-clearing brawl.

Southam had told Sam Studnicka of St. F.X. he "looked like a rapist," which prompted the melee. Southam later issued a statement saying he was unaware that Studnicka has a connection to a sexual assault survivor.

On Tuesday, Southam was suspended an additional five games, for a total of seven games.

The two teams are expected to meet Wednesday in Antigonish, for the first game in the AUS playoff quarter-finals.

"These suspensions are significant, coming at a time of year where most sanctions will be served during the playoffs," MacLean said in a statement Tuesday.

"A lot of really fine young people made serious judgment mistakes. I know they will learn from it and move on to bigger and better things. I want to thank everyone for their full co-operation."

Studnicka, who had been suspended two games in the initial round of discipline, received no further sanction on Wednesday.

Videos posted to social media show players on both teams hurling profanities, striking each other and grabbing each other's jerseys near the Acadia bench during the brawl.

The AUS said the suspensions will carry over into the 2019-20 regular season, if necessary.

"We have learned many things over the last 10 days. We now have the ability to strengthen our policies and to grow as an organization," AUS executive director Phil Currie said in a statement.