Mother of N.B. man found dead has message for premier: 'Your province is in crisis'

Mother of N.B. man found dead has message for premier: 'Your province is in crisis' 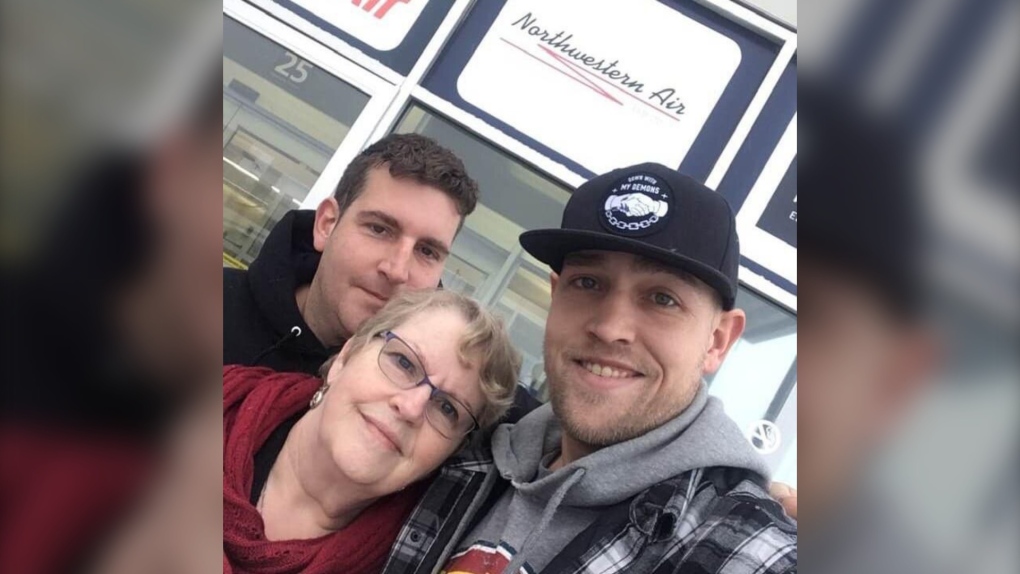 Mary MacDonald, centre, poses with her sons Luke Anthony Landry, right, and Julian Landry in this undated handout photo. MacDonald says a series of systemic failures led to the death of her son Luke in Moncton last week. THE CANADIAN PRESS/HO

The mother of a man found dead last week in Moncton, N.B., is calling for change after what she calls a series of systemic failures led to his body being found in a public washroom.

Luke Anthony Landry, 35, was a father, a musician and a devout Christian, his mother, Mary MacDonald, said Monday. And he needed more help than he got, she said.

"Something has to change, and it has to change quickly because we're going into winter," MacDonald said in an interview from her home in Prince George, B.C. "And my son, his name should mean something. He's not a statistic, he's not a homeless person only."

She had a pointed message for New Brunswick Premier Blaine Higgs: "Your province is in crisis, and if it isn't acted upon right away, more people are going to die."

The premier did not immediately respond to a request for comment.

Landry was released from incarceration on the morning of Nov. 21, with no money, no winter clothes and nowhere to go, MacDonald said, adding that her son had grappled with an addiction for years. That afternoon, he survived an overdose at a supervised consumption site, where staff were unable to find him a warm place to spend the night.

He died that night, and his body was found in a washroom outside Moncton City Hall that is heated just enough to keep pipes from freezing. RCMP misidentified his body and told another family they had lost their son.

"My son needed a spot on the floor, and somebody to watch him to see that he was OK," MacDonald said. "That did not happen. And it should have happened somewhere."

MacDonald said she understands that staff at the consumption site did everything they could to find him a spot. "But if there's somebody that vulnerable, there should be someplace that he could have been able to be," she said.

"He went the right way; he went out and asked for help," she added.

As for the RCMP, MacDonald said she cannot understand how so many things went wrong. "Why didn't they just check fingerprints?" she asked, noting that her son's prints were likely on file as he had just been released from custody.

Donna Price, who was mistakenly told by the RCMP that it was her son and not Landry who had died, says she thinks the error stemmed from a disregard for unhoused people. She is calling for better supports and more compassion for Moncton's vulnerable population.

As of Monday afternoon, MacDonald said the RCMP had not apologized to her for their mistake. She found out her son had died from a friend of his, and then gleaned details through media reports. She said she had to phone the police herself for confirmation that it was her son; they did not phone her.

"I understand people make mistakes and errors," Laming said in an email Tuesday. "But this is a massive error made by the police. It calls into question systemic issues relating to how certain people -- living and deceased -- are dealt with by authorities."

He said the case also highlights gaps in police oversight. Nova Scotia's police watchdog agency said in an email Tuesday that it won't investigate the error because the incident falls outside its mandate, which largely involves investigating police-involved death, injury, sexual assault and domestic violence.

Laming said oversight teams need more resources so they can be less rigid about their mandates. "This might be a good opportunity for provincial governments to invest more in these police oversight agencies," he said. "A case like this should not happen to begin with."

Cpl. Hans Ouellette with the New Brunswick RCMP says the force may investigate their error, but he said he could not comment further as the case may wind up in court; Price has said she intends to file a lawsuit.

MacDonald said Landry had two young daughters who loved him. He also had two brothers. All are now grief-stricken, she said. He tried many times to overcome his addiction, "but it was stronger than he was," she said.

"But that's not a reason for this to be swept under the rug," she added. "This was done wrong from the get-go."

This report by The Canadian Press was first published Nov. 29, 2022.

This is a corrected story. A previous version misspelled the first name of Blaine Higgs.

The Department of National Defence says Canada is working with the United States to protect sensitive information from foreign intelligence threats after a high-altitude surveillance balloon was detected.

Are magic mushroom stores the next pot shops?

Magic mushroom dispensaries are popping up in cities across Canada, with customers ranging from those looking for treatment for depression or PTSD to people wanting to 'micro-dose' a small amount of psilocybin, the hallucinogenic compound in magic mushrooms. But while the situation is in some ways reminiscent of when cannabis retailers set up shop before marijuana was legalized in 2018, Health Canada says there are no plans to legalize or decriminalize psilocybin products.

Hundreds of customers who scan QR codes for restaurant menus across Canada are being surprised by secret menus instead, revealing the hidden costs behind the food they eat.

One of Saskatchewan’s oldest hockey rinks has garnered national attention for its unique features and unusual design.

A paramedic signing off for duty for the last time got choked up and teary-eyed during his final radio call to colleagues.

Quebec recommends booster only to vulnerable never infected with COVID-19

Quebec is changing its vaccine strategy: public health officials are now recommending booster shots only for vulnerable people who have never had COVID-19.