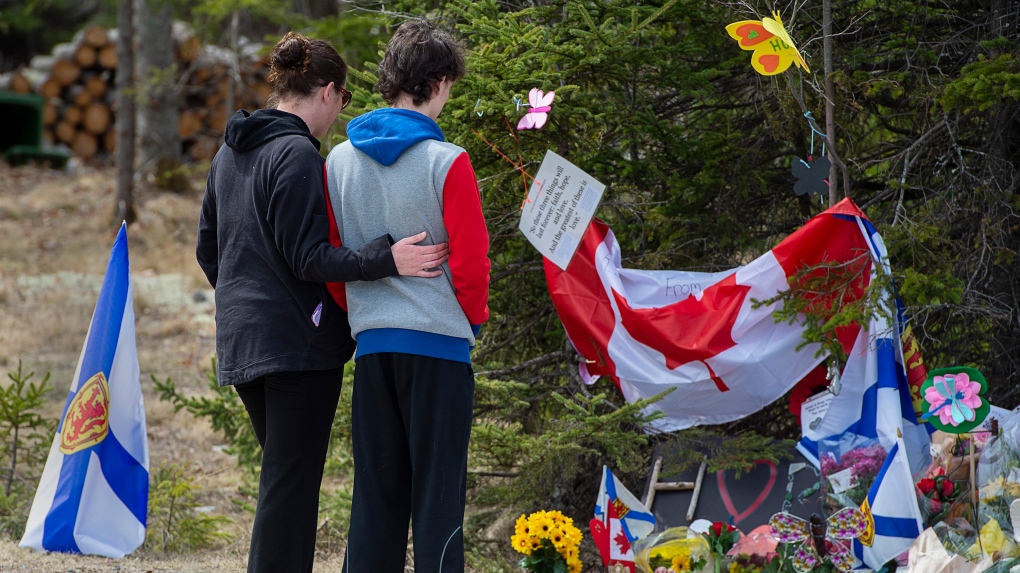 HALIFAX -- The RCMP officers dispatched to apprehend an active shooter in Portapique, N.S., last spring thought they were hearing gunshots long after the shooter had killed 13 people and fled the scene, according to a newly released statement from a senior Mountie.

The lone gunman, disguised as a Mountie and driving a replica RCMP cruiser, left the village by driving through a field around 10:35 p.m., nine minutes after the first RCMP cruiser arrived at the scene on the night of April 18, 2020, the RCMP have previously disclosed.

The suspect went on to fatally shoot another nine people the next day in three other communities before he was killed by police at a gas station north of Halifax.

In an affidavit sworn on June 3, RCMP Supt. Darren Campbell said officers reported hearing gunfire in the rural enclave as late as 2:50 a.m. on April 19, 2020, even though the Mounties later confirmed a witness had spotted the gunman escaping more than four hours earlier. Campbell's statement provides no explanation for the discrepancy, though there has been speculation the bangs could have been coming from homes the gunman had set on fire, including his own.

The eight-page affidavit also reveals for the first time that officers in Portapique thought they had spotted the killer carrying a flashlight just after 10:45 p.m., but they lost track of the suspect when the light was switched off and the person fled into nearby woods. The person with the flashlight emerged from the woods around 2:20 a.m. and was cleared as a suspect.

The senior officer said police faced further challenges early in their response when a witness reported @there were multiple shooters in the area.

The affidavit was submitted June 8 in response to a proposed class-action lawsuit in Nova Scotia Supreme Court. A law firm representing the families of victims is preparing two potential lawsuits. One of them focuses on the police response to the killings and names the RCMP and the Nova Scotia government. The other names the estate of the gunman.

Campbell, the RCMP's support services officer in Nova Scotia and a 30-year veteran of the force, confirmed in his affidavit that the first 911 call from Portapique was logged at 10:01 p.m. The first caller "reported that her husband had been shot by her neighbour .... The caller added that her neighbour is a denturist and that there was a police car or police cars in the driveway and that the man 'had a big gun,' " Campbell said.

Previously released court documents have confirmed that the first person police encountered when they arrived in Portapique told the officers that his neighbour, Gabriel Wortman, had shot him and was driving a vehicle that was identical to an RCMP cruiser. Campbell's statement does not offer that level of detail but notes that 911 calls "suggested the suspect was driving a car like a police car." The public was not warned about the vehicle until 10:17 a.m. the next day.

In his statement, Campbell says that some time after 10:34 p.m. on April 18, 2020, two RCMP officers entered the rural neighbourhood on foot to search for the shooter. Campbell said the officers, who were soon joined by a third Mountie, were guided by training he referred to as Immediate Action Rapid Deployment, which calls for an immediate response to active, life-threatening incidents.

The Mounties tried to bring in an RCMP helicopter to help with the search, but it was grounded because of maintenance issues, the affidavit says. At 10:49 p.m., officers searching the neighbourhood found a body on Orchard Beach Drive and more gunfire was reported.

At 11:32 p.m., the RCMP sent a message on Twitter advising Portapique residents to stay in their homes and lock their doors. And the public was warned to avoid the area. Campbell's statement says subsequent 911 calls alerted police to suspicious activity in other parts of the community, but those reports proved to be false.

Meanwhile, after being told the suspect could be driving a decommissioned police cruiser, an RCMP officer at the scene recalled giving a speeding ticket to the suspected shooter. That officer then shared photos of the suspect's driver's licence and the vehicle he had stopped -- a white 2013 Ford Taurus police interceptor with reflective tape on the rear bumper.

That's when the RCMP began informing other police forces about the gunman's identity. The Mounties issued a "be on the lookout" or BOLO alert, which made it clear the suspect was armed.

Police learned the killer had purchased three decommissioned police cruisers in recent years, but all three were accounted for early on April 19, 2020. Two were found burned on the suspect's Portapique property and the third was located at his home in Dartmouth, N.S. There is no indication in Campbell's affidavit police were initially aware of a fourth vehicle he used during his rampage through northern and central Nova Scotia.

Campbell's statement says police had established a two-kilometre lockdown perimeter around Portapique by 1 a.m. on April 19, 2020, which included four roadblocks on Highway 2, the main route through the village. That was almost two hours after the gunman parked his car about 24 kilometres away, behind a welding shop in Debert, N.S., where he spent the night.

This report by The Canadian Press was first published June 16, 2021.