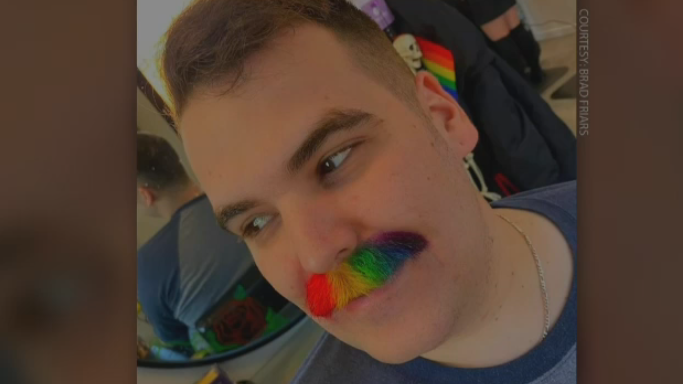 In support of Movember, Brad Friars' initial goal was a promise to dye his moustache rainbow coloured, if he reached $1,000 in donations. (Courtesy: Brad Friars)

Moncton native Brad Friars enjoys a good challenge, which is why he’s fully engaged in the Movember campaign.

"Anytime that there’s a goal, that's what I want to achieve," said Friars who has a multi-coloured moustache in support of Movember.

"It is such an easy way for people to ask questions and invite conversations to talk about men’s mental health," said Friars, who is also working to put men’s health at the forefront and combine his efforts with a fundraising campaign. "I’ve been raising money through Movember’s website. As it currently stands, I have raised $1,450."

Friars' initial goal was a promise to dye his moustache rainbow coloured, if he reached $1,000 in donations.

"Once I did that, everyone saw it at work and they said where can they donate," said Friars, who explained why he chose the rainbow motif.

The movement to change the face of men’s health has exploded in recent years.

Stars from the sports and entertainment world have also joined the effort.

Mike Milloy from Movember Halifax said the movement started with a focus on prostate cancer awareness.

"And it has since evolved to encompass all aspects of men’s health and suicide prevention," said Milloy. "Over the last 16 years, it has grown immensely."

"Men’s mental health problems, run counter to masculine, gender norms," said Sherry, who added men are now discussing their own health and mental health more openly than ever before.

"We are moving in the right direction when it comes to destigmatizing mental health for men in general," said Sherry. "But we also have a long way to go."

The growth of Movember has produced some jaw-dropping results.

"This year in Canada we are looking at raising $20 million. 60,000 folks from Canada signed up this year," said Milloy.

Milloy said it’s not just about the money, it’s also about the awareness surrounding critical issues like all areas of men’s health.

In an emotional and powerful speech at an International Holocaust Remembrance Day event in Ottawa, a survivor stressed the importance of remembering the millions of victims murdered by the Nazis during the Second World War and underscored the need to stand up against anti-semitism and hate.

Canadian study suggests we may be underestimating children’s memory capabilities

New research from York University suggests that we may be underestimating what kids are capable of when it comes to their memories.