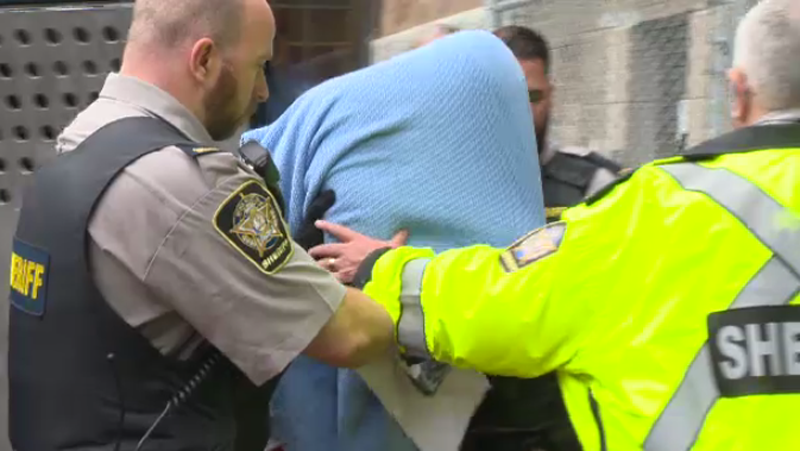 This is the scene of Terry Marriott Jr.'s death in a basement TV room on February 20, 2009, a jury in Nova Scotia Supreme Court heard Monday.

In the first-degree murder trial against Jimmy Melvin Jr., the star witness described a bloody scene at a home in Harrietsfield, a rural community on the outskirts of Halifax.

"There was blood everywhere," Derek Thomas MacPhee told the jury of eight women and six men. "There was a hole in the side of his head ... his face was all distorted."

MacPhee is in witness protection and received immunity in exchange for testifying.

The animosity between Melvin and Marriott started before that cold February day.

In an opening statement, Crown attorney Christine Driscoll alleged Melvin had a "beef" with Marriott.

MacPhee told the jury that Melvin had been "talking about killing (Marriott) for years."

In fact, MacPhee even attempted to arrange a reconciliation between the two men.

"I just wanted them to get along," he told the jury, adding that he thought "everything was good" after the meeting.

Driscoll said that on Feb. 19, 2009, Marriott went to the Harrietsfield home of a friend, John Lively, where he laid down after a night out at a Dartmouth strip club, to "sleep off the partying."

"Mr. Lively gave him a blanket," Driscoll told the jury. "It was one of Mr. Lively's daughter's blankets. It had Disney princesses on it.

"Mr. Marriott never got off that couch."

Instead, MacPhee told the jury he drove Melvin to Lively's house on his four-wheeler. He heard two quick bangs followed by three slow bangs.

"You know when it's snowing and it's foggy in Halifax and everything is right quiet," he told the jury, choking up as he described the loud sound of the gunshots ringing through the air. "I couldn't believe how loud it was."

Melvin came running out of the house, jumped on the four-wheeler and MacPhee took off through the woods, he told the jury.

MacPhee returned to the house "around suppertime," Driscoll told the jury.

She said MacPhee discovered Marriott shot several times in his head and body.

After waking Lively up, Driscoll told the jury MacPhee called 911.

"The Crown is alleging that Mr. Melvin ... armed with a loaded gun, went into that home ... went down the steps to that TV room where Mr. Marriott was sleeping, completely defenceless, and shot Mr. Marriott to death before fleeing," Driscoll said.

The Crown attorney warned the jury at the outset of the trial that they might find the lifestyle led by Marriott and others in the case "distasteful."

Indeed, MacPhee -- who admitted to stealing hundreds of vehicles and has a long rap sheet including arson, assault and theft -- described a circle of friends who routinely dealt drugs, carried loaded weapons and committed violent crimes.

The Crown urged jurors not to judge how people live but to decide whether the evidence proves beyond a reasonable doubt one's guilt.

Melvin has pleaded not guilty. The case is expected to run until June 9.