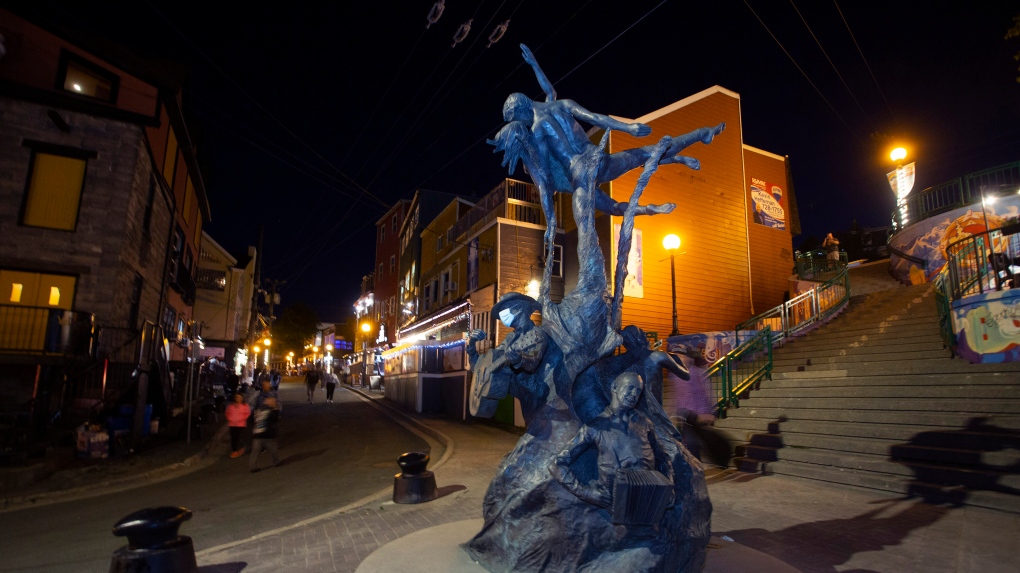 Two Muslim sisters in St. John's, N.L., are speaking out after a man approached them where they work, screamed at them and then smacked the 15-year-old sister across the head, nearly knocking her over.

Asmahan Al Salloum, 18, captured the May 7 incident on video, which was viewed by The Canadian Press. The video shows an older white man with a short grey beard and an orange hat screaming, "I don't know what you're up to," before hitting 15-year-old Malak Al Salloum. Malak stumbles sideways and then throws an iced coffee into the man's face.

Asmahan stopped filming then because the man moved toward her sister again, she said Thursday in an interview in which her sister also took part. She said Malak then hit him in his glasses, and he backed away and left.

Malak said she wants to encourage people to stand up for themselves. "(It) doesn't matter the colour of your skin, where you're from, how you live," she said. "Don't let someone hurt you and be quiet about it. You have to talk to people."

The sisters are from Syria, and they arrived in St. John's with their family about seven years ago, Asmahan said. They and a co-worker, all wearing hijabs, had just taken out the trash at a fast-food restaurant where they work when the man approached them.

He quickly began yelling racial slurs, and called them the N-word, Asmahan said.

"We were speaking in Arabic and we didn't answer him," she said. "At first we actually thought he was joking, but then it turned serious."

They called the Royal Newfoundland Constabulary that night and handed over the video to the responding officers, Asmahan said. But in the following weeks, the police tried once unsuccessfully to contact them -- an officer reached their father and asked if the force could share a still from the video to ask the public for help identifying the man, she said. He asked police to phone back that night to get permission from his daughters.

"They never called again," Asmahan said. "So that's why we assumed they didn't take it as serious, or maybe they didn't care."

Const. James Cadigan, a spokesman for the force, said Thursday police are actively investigating the incident, and no charges have been laid. As of Friday afternoon, the force had not issued any advisories saying they were looking for the man in the video or seeking information about what happened.

Cadigan couldn't say if a suspect had been identified or why an advisory hadn't been issued. He said officers use many methods to identify suspects. "If at a point they deem a media advisory becomes necessary, then they will make that request," he added.

Sobia Shaikh, chair of the Anti-Racism Coalition of Newfoundland and Labrador, questioned the police response.

"We need government to take a strong stance speaking on this incident, that this is not tolerated," she said in an interview. "But that's not what we're hearing."

The incident comes after a St. John's mosque was egged on March 15. In January, a Memorial University professor drew criticism after using the N-word in an online lecture. That happened the same month that Shaikh's group denounced racist material about immigrants found in the social studies curriculum used in the province's high schools.

Shaikh said incidents of hate and racism against Muslim and other racialized people are increasing in the province, especially against women. "I don't know how many more stories there have to be," she said.

Asmahan Al Salloum said since she first spoke out about what happened, she's heard from many people sharing experiences with racism and abuse, and she hopes they'll speak out too.

This report by The Canadian Press was first published May 27, 2022.

Anti-Taliban law could be tweaked to get more humanitarian aid to Afghans: minister

A law outlawing any dealings with the Taliban, which charities complain is impeding their ability to help needy Afghans, could be adjusted by the federal government to give more flexibility to aid agencies.

Russian forces are pounding the city of Lysychansk and its surroundings in an all-out attempt to seize the last stronghold of resistance in eastern Ukraine's Luhansk province, the governor said Saturday.

Infection with HIV can accelerate aging within the first two to three years of infection, study says

Living with HIV may have an immediate effect on how your body ages, according to new research which showed that cellular aging was sped up within two to three years of infection.

A prominent housing advocacy group fears Quebec could see an increase in households left without a permanent place to live as leases expire across the province on July 1.

With hospitalizations up, France weighs return to masks

Tourism is booming again in France -- and so is COVID-19. French officials have 'invited' or 'recommended' people to go back to using face masks but stopped short of renewing restrictions that would scare visitors away or revive antigovernment protests.