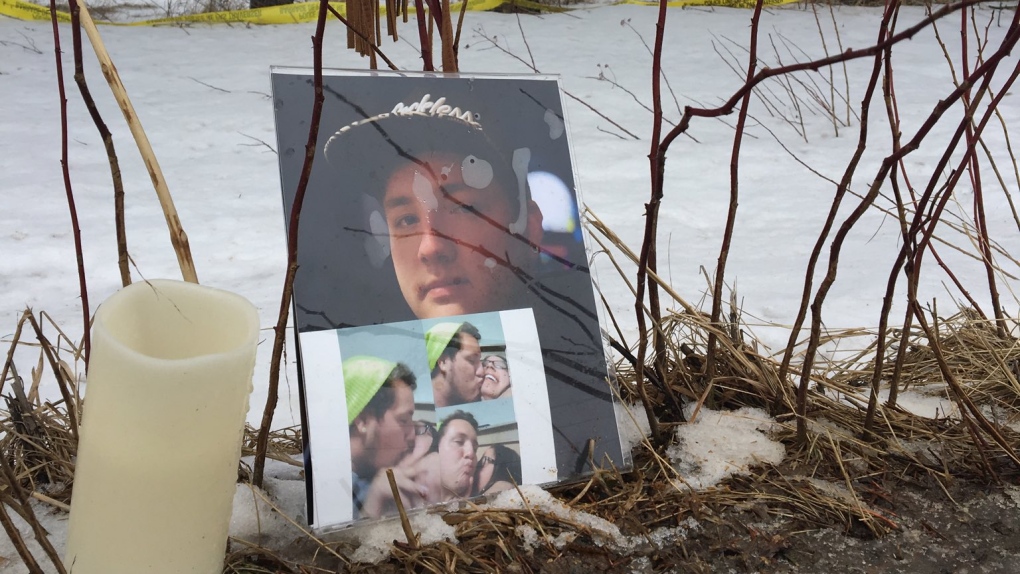 A roadside memorial for Brady Francis is seen at the site where the 22-year-old man was struck and killed by a vehicle in Saint-Charles, N.B.

HALIFAX -- New Brunswick’s Public Prosecution Services says it will not appeal the verdict in the hit-and-run trial of Maurice Johnson in the death of Brady Francis.

Johnson, of Saint-Charles, N.B., was charged in June 2018 with failing to stop at the scene of an accident involving bodily harm or death.

He pleaded not guilty to the charge, which stemmed from a collision that claimed the life of 22-year-old Francis, of the Elsipogtog First Nation, the night of Feb. 24, 2018.

During Johnson’s trial, friends of Francis testified that they found his body on the side of Saint-Charles Road South in Saint-Charles, N.B. soon after leaving a party he had attended. Francis died at the scene.

The court heard that Francis had called his parents to pick him up from the party that night. He was standing on the side of the road, waiting for his ride, when he was struck by a vehicle.

Johnson was found not guilty on April 28. In court documents, the judge stated that the prosecution had failed to prove Johnson’s guilt beyond a reasonable doubt.

Supporters of Francis and members of the Elsipogtog First Nation have expressed sadness and disappointment over the verdict, which they hoped would be appealed.

However, Pierre Roussel, the director of Public Prosecutions for New Brunswick, said in a statement on Wednesday that the Crown will not appeal Johnson’s acquittal.

“The acquittal of Johnson in this case has raised many questions and comments from the public. In particular, some have stated that this case exemplifies how there is no justice for Aboriginal or Indigenous people in Canada,” said Roussel.

“There is absolutely no indication from our review of this decision that racial bias or partiality played any role in the acquittal in this case. The decision was made on the basis of the evidence heard at trial and the applicable law.”

Roussel explained that the purpose of reviewing a verdict is to determine whether the judge made errors that could have affected the ultimate decision of guilt or innocence, and the Crown could not find any errors in law on which to appeal the verdict in this case.

“There is an extremely limited avenue for the successful appeal of an acquittal in our system of justice. Identifying an error of law alone on the part of the trial judge is not sufficient,” said Roussel.

“Any error of law identified must be such that it would satisfy the appellate court that the error might reasonably have had a material bearing on the acquittal.”

The decision not to appeal Johnson’s acquittal sparked a protest rally outside the New Brunswick legislature Wednesday afternoon.

Some protesters said the decision illustrates a systemic problem with the justice system.

“This isn’t the first time that our people have protested the unjust outcomes of the court process,” said Malian Levi. “There is no access to justice for First Nations people in Canada.”

Levi spoked of Francis, saying his loved his people and his culture, and is missed by the entire Elsipogtog community.

About 100 people gathered at the protest, saying it’s just the first step in their response to the decision.

Rally for Brady Francis outside the NB legislature. Today, NB’s public prosecution service announced it would not appeal the acquittal of Maurice Johnson, originally charged with the hit and run death of Francis.

The Judge ruled the Crown had failed to prove Johnson’s guilt. pic.twitter.com/4RfqFLcWmh