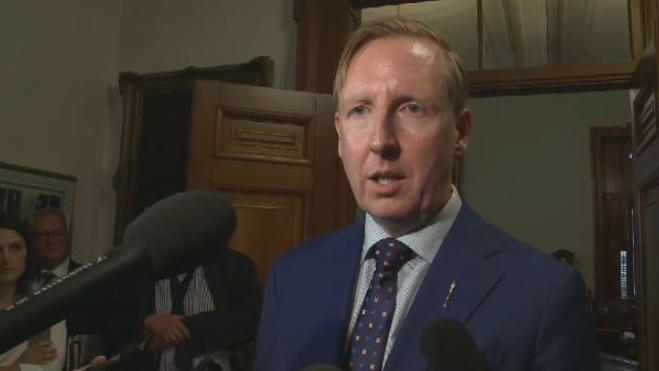 "We are not going to tolerate violence in New Brunswick classrooms and that obviously includes bullying," New Brunswick Education Minister Dominic Cardy said Friday after a education summit in Fredericton wrapped up.

FREDERICTON -- New Brunswick's education minister says bullying and other violence in the classroom won't be tolerated, and he's looking to develop a new discipline policy.

Dominic Cardy's comments came as a three-day provincial education summit wrapped up in Fredericton on Friday.

The summit included the release of the results of student perception surveys on a variety of issues, including bullying.

Students were asked it they had been subjected to physical, social, verbal or online bullying. While many said they had, most reported they still felt safe at school.

Rob Benn-Frenette of BullyingCanada said it is disheartening that in some cases up to 52 per cent of students report being victimized by bullies.

Benn-Frenette declined to be interviewed Friday, but in a statement said his group is seeing more and more youth in crisis.

"We are not going to tolerate violence in New Brunswick classrooms and that obviously includes bullying," he said after giving his closing remarks to the Fredericton conference.

"If we are going to be building a culture of respect that we expect our children to model when they're adults, it has got to start with being modelled in the school system."

Cardy said he's asking teachers for their ideas on how discipline policies can be developed.

"We are going to make sure our teachers have the power to have proper discipline in their classrooms ... to make sure that every child can experience a school free of violence," he said.

He says a new discipline policy is a priority for him and wants to hear input as soon as possible.