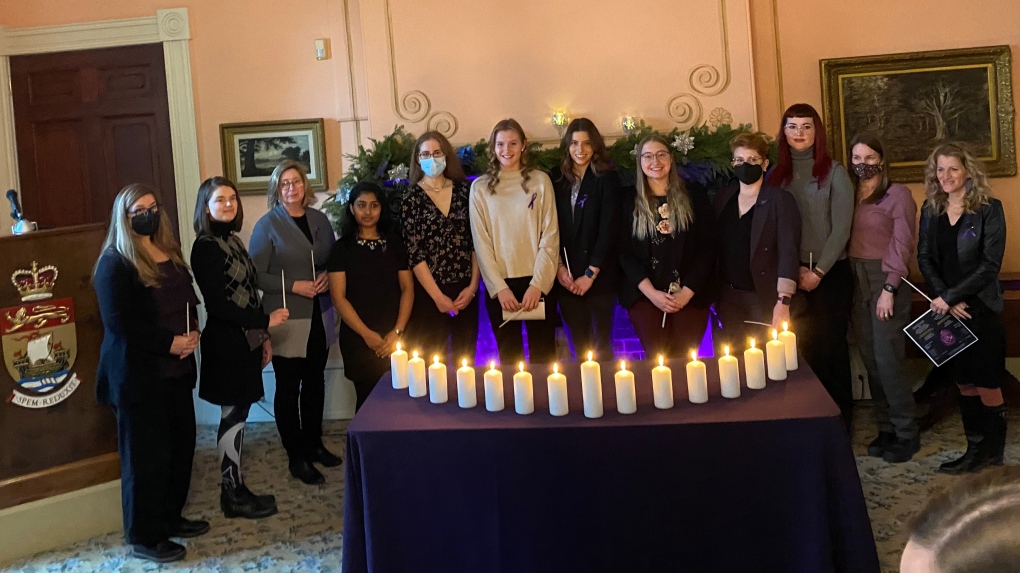 Between 50 and 75 engineers, students, community members, and political leaders all gathered to light candles in memory of the 14 young women who lost their lives while studying at the post-secondary institution. (Alyson Samson/CTV)

It’s been 33 years since a tragic shooting at a Montreal engineering school left 14 students dead. Tuesday, thousands of Canadians are coming together to observe one of the darkest days in the country’s history.

On Dec. 6, 1989, a 25-year-old man launched a targeted attack against women on the Ecole Polytechnique campus, killing 14 female students and injuring 13 others. It was later learned the killer had a hatred of feminists --- advocates who fight for the equal rights of women.

The mass shooting made international headlines and prompted a wave of activism fighting to end violence against women.

In 1991, the anniversary was proclaimed a National Day of Remembrance and Action on Violence Against Women.

Students and staff of the engineering school marked the anniversary by holding a ceremony and placing rose wreaths on the commemorative plaque near the student entrance.

And in New Brunswick, a vigil took place at Government House in Fredericton.

Dozens of engineers, students, community members, and political leaders gathered to light candles in memory of the 14 young women who lost their lives while studying at the post-secondary institution.

“We know that in our communities throughout New Brunswick, we’re seeing all-time highs of violence against women,” said Scott-Wallace. “They’re staggering numbers, really. We know that we have some of the highest numbers in the country in terms of gender-based violence and deaths.”

According to Scott-Wallace, New Brunswick has had the third-highest rate of intimate-partner violence reported to police in Canada for three years in a row.

“Honouring the lives of these 14 women can serve as an important reminder of the consequences of violence against women,” she said.

A 15th candle was also lit in memory of all women who have died due to domestic and intimate-partner violence.

Scott-Wallace said, even with all the work done in the last 30 years, there’s still a long way to go before gender equality is achieved.

In a statement, New Brunswick Premier Blaine Higgs encouraged the public to remember the women who lost their lives in the mass shooting.

“Every woman in New Brunswick deserves to live a life free of violence,” said Higgs. “We must continue to work hard to eliminate violence in our communities.”

Asteroid coming exceedingly close to Earth, but will miss

An asteroid the size of a delivery truck will whip past Earth on Thursday night, one of the closest such encounters ever recorded.

Amsterdam has shared a time-lapse video of the construction of its brand-new underwater bike-parking facility.