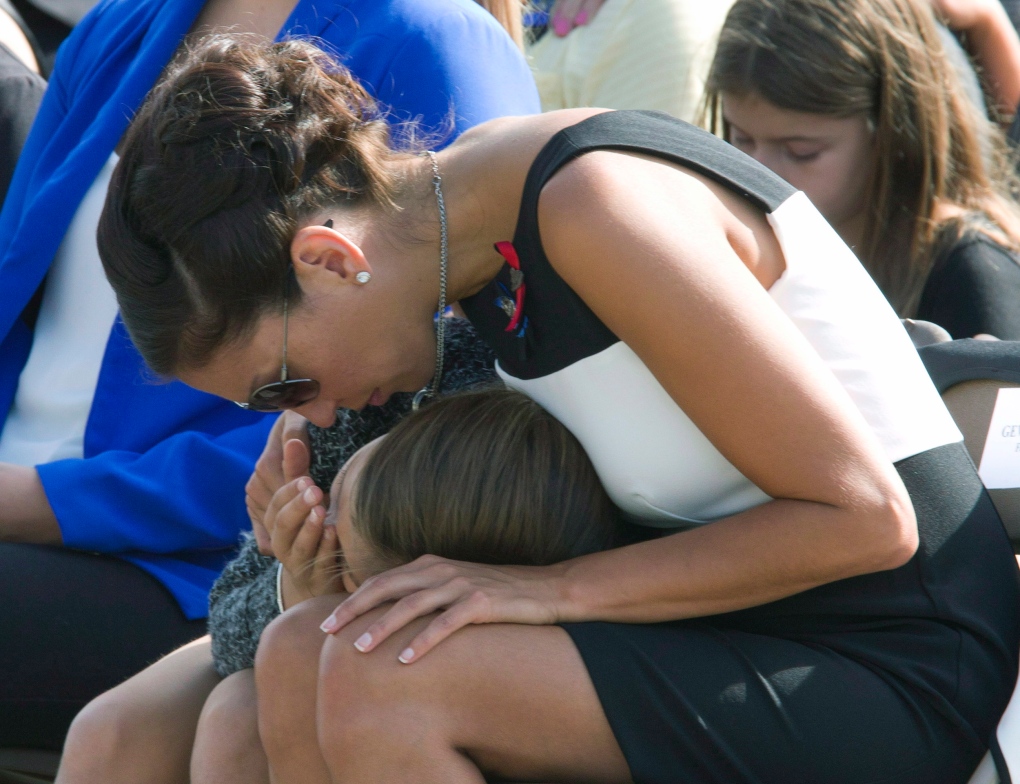 Angela Gevaudan, the wife of RCMP Const. Fabrice Gevaudan, who was killed while on duty June 4, 2014 in Moncton, comforts her daughter Emma as they take part in the Canadian Police and Peace Officers Annual Memorial on Parliament Hill, in Ottawa on Sunday, Sept. 28, 2014. (Fred Chartrand / THE CANADIAN PRESS)

FREDERICTON -- The wife of one of the three Mounties shot and killed in New Brunswick in June 2014 is applauding the provincial government's efforts to help first responders suffering with post-traumatic stress disorder.

"The stigma that is associated to post-traumatic stress is part of the reason why so many people don't ask for help when they start experiencing symptoms and the earlier you ask for help, the easier it is to treat the issue," Gevaudan said Friday.

The amendments to the Workers' Compensation Act mean that when first responders such as police officers and firefighters are diagnosed with PTSD, it will be presumed that the condition is the result of events they experienced in their job.

They will be entitled to be paid compensation.

Gevaudan says reliving the events in an effort to prove to your employer that you are struggling is retraumatizing, but the changes will mean that affected first responders can now focus on healing.

Gevaudan, whose husband Fabrice was killed June 4, 2014 in Moncton when gunman Justin Bourque when on a shooting spree, says PTSD is a difficult issue and one that she is dealing with personally.

Constables Doug Larche and Dave Ross were also killed by Bourque, while constables Eric Dubois and Darlene Goguen were injured.

The idea for the legislation was the result of a private members bill introduced last year by Progressive Conservative member Ross Wetmore.