N.B. Liberals promise to modernize liquor laws, expand where alcohol can be sold 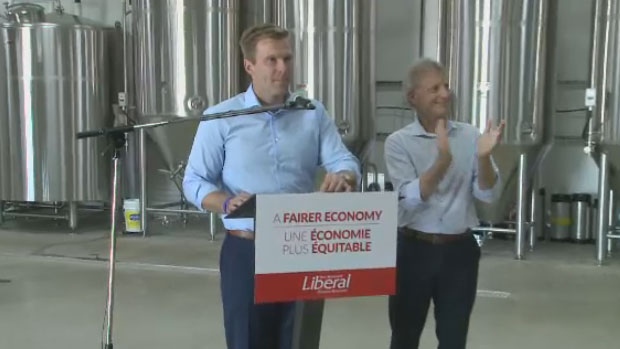 "To create more opportunities here in New Brunswick, we will give consumers more choice and flexibility," leader Brian Gallant said in a news release Saturday.

He said the Liberals would expand the practice of letting patrons bring their own bottles of wine to more restaurants and allow them to purchase products to go.

The party would work with local producers and entrepreneurs from the province's beer, wine and distillery industries to update their liquor laws, according to Gallant.

"A major component of our multi-year Economic Growth Plan has been the development and promotion of local food and beverages," he said. "We will give local entrepreneurs more opportunities to grow their businesses here in our province, so they can create more jobs for New Brunswickers."

In August, the Atlantic Convenience Stores Association commissioned MQO research to poll nearly 400 New Brunswickers to see what they would think of expanded sales of packaged beer and wine in convenience stores across the province.

Nearly 75 per cent of those polled responded favourably, and association president Mike Hammoud said this points to an appetite for increased convenience when it comes to buying alcohol.

"Those people are already coming into our stores, so it just makes sense, from a convenience point of view," he said in an interview.

"We're in every community. Most people won't even have to drive to get the products."

He added that he would like to hear more about how exactly the government intends to roll out this plan.

In a release, Blaine Higgs said Saturday that such a credit would allow families to claim eligible fees paid to register their kids in these types of programs.

Families would be able to claim up to $500 in expenses per child for a program involving physical activity, and up to $250 per child for programs involving arts, culture and recreational activities.

He said the party would also work to reverse Policy 711, which limits foods sold in schools with a low nutritional value and are higher in saturated fats, sugar or salt.

"Certainly we should educate our children about the importance of good nutrition and regular physical activity on good health outcomes," said Higgs.

"But we think helping them participate in activities with their peers is the goal -- not legislating what's on the menu."

Also on Saturday, the People's Alliance of New Brunswick said they would work to ban herbicide spraying on Crown lands if the party is elected Sept. 24.

Party leader Kris Austin said he would like to replace spraying with more environmentally friendly methods like mechanical thinning.

"It is long past time for us to stop poisoning ourselves and our wildlife," said Austin in a release.