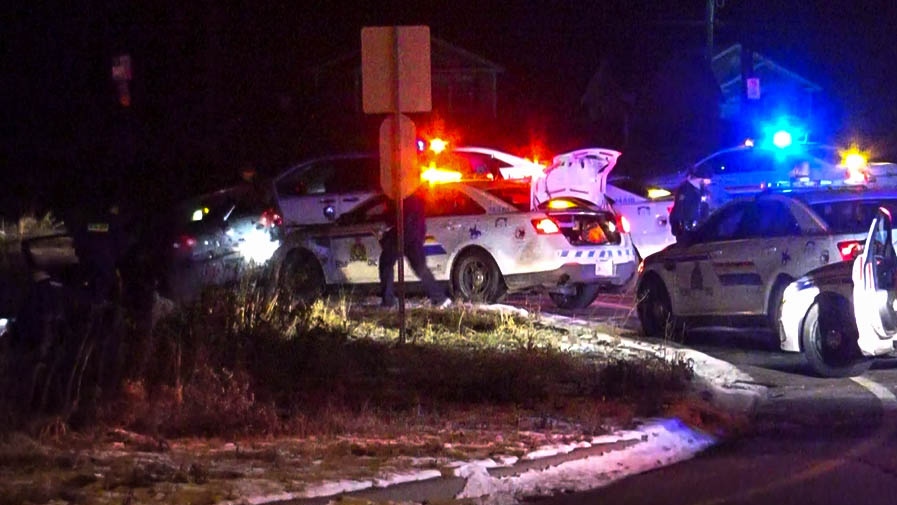 MONCTON, N.B. -- A New Brunswick man is facing 16 charges after he allegedly drove his vehicle into four RCMP vehicles and towards police officers, resulting in him being shot.

The RCMP responded to two reports of robberies outside bank branches on Mountain Road and Trinity Drive, as well as at a gas station on Mountain Road, in Moncton over the weekend.

At 3:30 a.m. Saturday, police received a report from a business on Mountain Road that someone appeared to be sleeping in a car matching the description of the vehicle involved in the alleged robberies.

When police tried to arrest the driver, they say he resisted, and instead drove his car into several parked vehicles, including four RCMP vehicles.

Police say the man then drove his car towards the police officers, and a Mountie fired their gun towards his vehicle, which then fled the scene.

The man was eventually arrested after driving his vehicle into a ditch near Horsman Road and Berry Mills Road.

He was treated in hospital for a minor gunshot wound.

No police officers were seriously injured.

The 27-year-old man from Lutes Mountain, N.B., appeared in Moncton provincial court on Tuesday. Joshua Thomas Rossiter has been charged with the following 16 offences:

The man has been remanded into custody pending a bail hearing on Jan. 7.

Meanwhile, the New Brunswick RCMP has referred the incident to the Independent Investigation Unit of Manitoba – an independent civilian oversight agency -- which will conduct a review.

The agency is asking anyone who may have witnessed the incident, or has information or video, to call 1-844-667-6060.