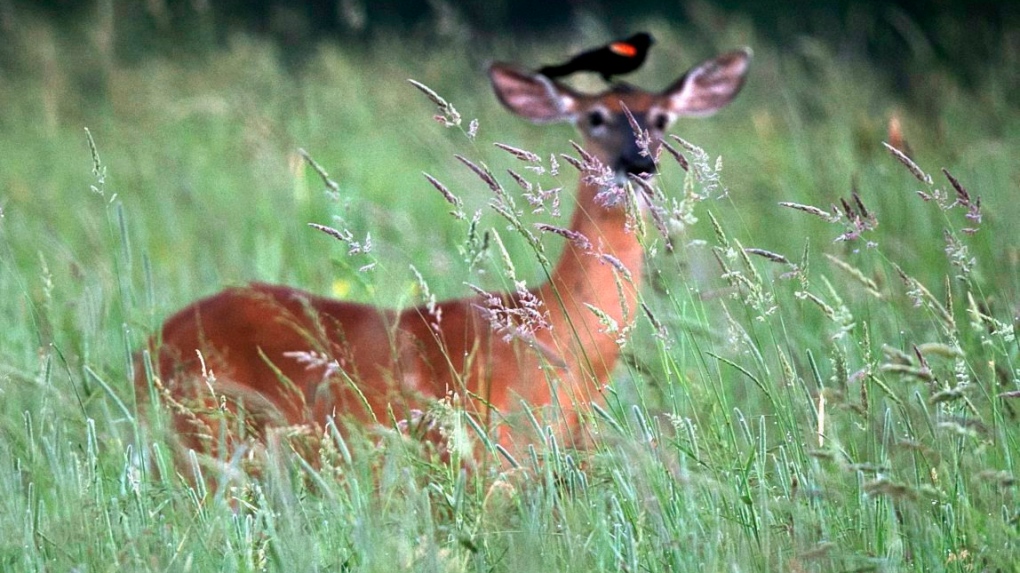 A red-winged blackbird perches atop a white-tailed deer in the tall grass of a farm field, Wednesday, June 22, 2016, in Turner, Maine. THE CANADIAN PRESS/AP Photo/Robert F. Bukaty
HALIFAX -

New Brunswick is launching a pilot project that will help to feed low-income families in the southwestern part of the province.

The deer donation program will begin this fall in Saint Andrews, N.B. It is expected to distribute up to 450 kilograms of ground venison and stew meat to those in need.

“Finding sources of high-protein foods is one of the biggest challenges for struggling families,” said Health Minister Dorothy Shephard. “This partnership allows for venison to be harvested by selected hunters and processed and distributed to a local food bank under Department of Health protocols.”

In a government news release on Wednesday, it says the Department of Natural Resources and Energy Development has compiled a manual explaining the rules and guidelines licenced hunters must follow.

According to Mike Holland, minister of Natural Resources and Energy Development, the rules and guidelines are very detailed.

"Only very healthy animals will be accepted, and hunting will only be allowed on days cooler than 15 degrees. The handbook also addresses best practices for field dressing and transport. Once the hunter registers his tagged deer with us, all the meat from that animal can be traced all the way through, from the meat processor, to the food bank, to the consumer,” said Holland.

Plans were in place to launch the program last year, but Shephard asked that more food safety guidelines be put in place first.

“We wanted to do it right the first time, to see what other jurisdictions are doing to ensure that every step – from forest to table – could be implemented in ways that reduce potential food safety risks,” said Shephard.

Deer overpopulation is an ongoing problem in Saint Andrews, according to government officials.

Mayor Brad Henderson said it is not unusual to have up to 200 animals within town limits.

“There are no natural predators here,” said Henderson. “The deer destroy people’s gardens, but they have become more than just a nuisance animal; they are also responsible for many collisions with vehicles.”

The Town of Saint Andrews has been working with the provincial government for years to find ways to keep the deer numbers under control.

“Last year, 42 deer were killed within town limits as part of the nuisance hunt,” said Henderson. “If this deer donation program proves successful, it could mean families will be able to count on the annual cull to put meat on the table every winter.”