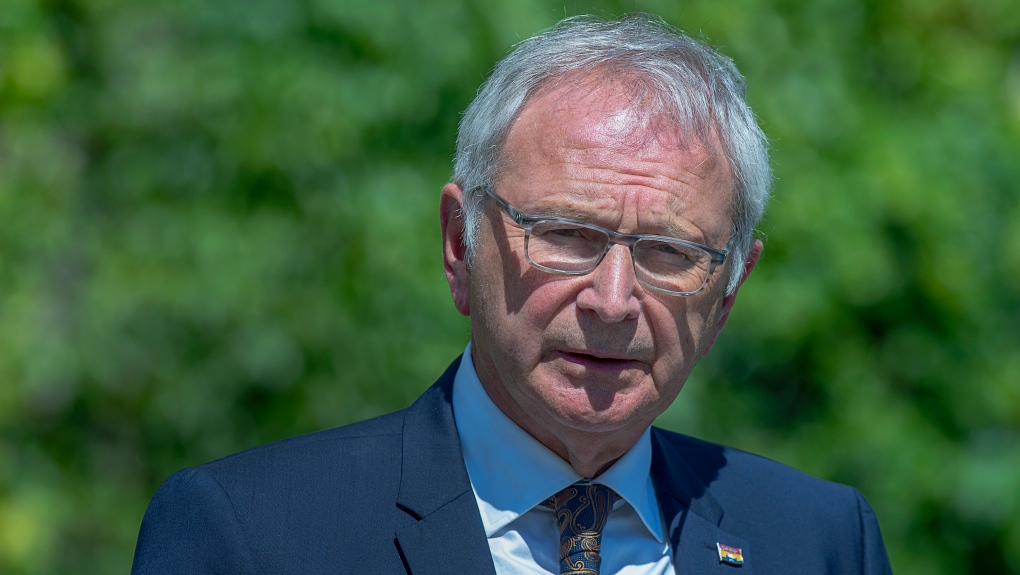 New Brunswick Premier Blaine Higgs talks with journalists after calling an election following a visit with Lt.-Gov Brenda Murphy at Government House in Fredericton on Monday, Aug. 17, 2020. The election will be held September 14. THE CANADIAN PRESS/Andrew Vaughan

FREDERICTON -- The New Brunswick Progressive Conservatives have released a platform with $11.4 million in new spending promises, just hours ahead of the final televised exchange between party leaders.

Promising to "Recover. Reinvent. Renew," the document was published Thursday as the campaign entered the final stretch before Monday's vote.

The platform repeats last year's budget plan to provide a modest spending increase in health care, it continues a push to retain immigrants and it commits to provide updated civics classes and better internet service to schools.

There will be an added $1 million for a school food program and pay increases for early childhood educators that will cost $3.5 million a year. The platform also includes an increase of $2 million annually for policing.

Tory Leader Blaine Higgs said during a news conference the modest spending increases will be achieved without tax hikes.

"There will be no new tax increases under our government, because we have enough money in the system," he said. "We just need to get results for what we're spending."

Higgs said the plan is designed to help businesses compete "in a post-COVID, digital world where e-commerce will be a key for domestic and export growth." He said a Tory government would give priority to New Brunswick businesses in procurement, where possible.

Party leaders will have a chance on Thursday evening to debate the latest Tory proposals during a roundtable discussion broadcast on CTV. The four leaders whose parties have members in the legislature are taking part in the virtual event.

The Tory platform summarizes the kind of message Higgs has been delivering on the campaign trail and in public debates.

In its opening pages, Higgs says the minority Tories fulfilled 62 per cent of the party's promises from the 2018 election, noting that prior to COVID-19 there was net debt reduction of $129.3 million.

The document also emphasizes that Statistics Canada is projecting the province will achieve a rapid return to pre-COVID-19 employment levels.

Health care has been a tender area for the Progressive Conservatives -- and the platform emphasizes that the prior budget's small spending increases will be maintained if the party is re-elected.

Earlier this year, Higgs had to retreat from his party's plan to reduce emergency room hours and convert acute-care beds into long-term care at six rural hospitals after a public outcry.

Liberal Leader Kevin Vickers has accused Higgs of having a secret plan to cut health services.

However, the Tory platform repeats prior announcements on health care to provide $5 million to recruit doctors in rural areas, $4.2 million to add nurse practitioners to clinics and ERs, and to cut "excessive wait lists" for hip and knee replacement in half by next March.

The spending increase on early childhood education confirms this year's 75-cent increase in the hourly wage, and the platform promises wages will go from $16 to $19 hourly by 2023.

Monday's election is the first in the country since the start of the pandemic.

This report by The Canadian Press was first published Sept. 10, 2020.