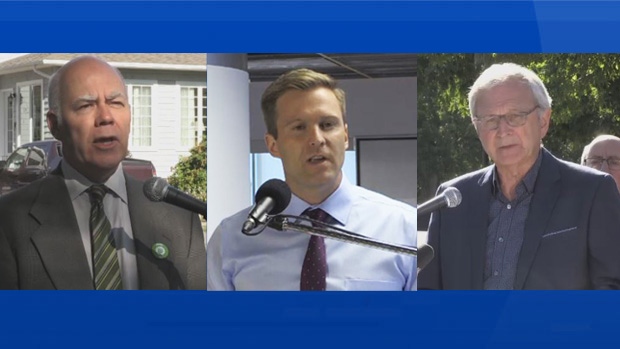 For much of the debate, Gallant and PC Leader Blaine Higgs clashed over each other's records, largely ignoring the other three leaders on the stage. Higgs then pulled a piece of paper from his pocket.

"Brian Gallant rails on about my time as finance minister," Higgs said. "I find it very ironic that Brian Gallant offered me a position as minister of finance or as deputy minister, and I have a sworn affidavit that says this."

Gallant laughed, but Higgs persisted, saying he chose not to take the job because he felt the Liberal the government was "irresponsible."

The young Liberal premier quickly denied any job offer was made.

"You'll swear an oath on that?" Higgs replied.

"I will swear an oath on that, absolutely," Gallant said.

An affidavit, later produced by Higgs, states that Gallant made the offer in a series of text messages exchanged after the election in October 2014.

Gallant issued a statement later in the evening, saying he did meet with Higgs after the 2014 election to talk about the province's finances, but he refutes any claim of a job offer.

It was easily the most surprising part of the 90-minute debate, but there were more sparks when the leaders sparred over language, climate change and the economy.

Members of the public and party staff were barred from attending the debate inside the Riverview Arts Centre, but that didn't help with the decorum.

Despite tight controls, it was often a free-for-all, with the leaders talking over each other in an effort to get their points across.

On language, People's Alliance Leader Kris Austin said he'd get rid of language duality in the health and education systems and use the savings to improve service.

"It's only when governments implement ridiculous policies -- that causes the tensions among us," he said. "That's why we are committed to ending duality. With a $14-billion debt ... we would do well to afford one system. Let alone two. These parties will not talk about it ... but we cannot take a politically correct, sanitized approach."

"To open the language debate at this time is counterproductive," she said. "We need to unite the province, not divide the province."

Higgs said it's unfortunate that language is still a source of debate in New Brunswick. He said poor second-language scores in the schools is the result of politicians constantly changing the curriculum.

Green Leader David Coon said both the Liberals and Tories have divided people.

"We can't play favourites," he said.

On the issue of climate change, the federal carbon tax became the target, with Higgs saying the Tories would fight it in court. He said large emitters need tougher regulations.

Austin said adding more tax is not going to address climate change. He said the government needs to help people move to solar, geothermal and other renewable energy sources.

The Green party also supports tougher limits on large emitters, but Coon also said there needs to be better public transportation across the province.

Higgs repeatedly accused Gallant of making expensive promises that will burden the province with more debt.

"The reason our opportunities are being restricted is because money is being blown out the door by promises, expensive promises to buy votes," Higgs said, raising his voice. "I've said I will not do that in this campaign."

At one point in a debate over Indigenous rights, Coon took direct aim at Higgs, suggesting the Tory leader didn't understand some basic concepts about such a weighty issue.

"The Indigenous people are rights holders, Mr. Higgs -- not stakeholders," Coon said as Higgs looked on in silence.

"We have a government-to-government relationship with First Nations in this province, and we need to start behaving that way. To suggest that they are simply stakeholders has got to be insulting."

McKenzie also seized on the Indigenous rights issue, saying New Brunswick had to do a better job of making sure First Nations get the help they need.

Gallant said his government had taken Indigenous issues seriously, pointing to negotiations to allow the proposed Sisson mine to proceed.

The leaders face each other again Friday in English and French-language debates on Rogers TV.

At dissolution, the seat count in the legislature was 24 Liberals, 22 Progressive Conservatives, one Green, one Independent and one vacancy.