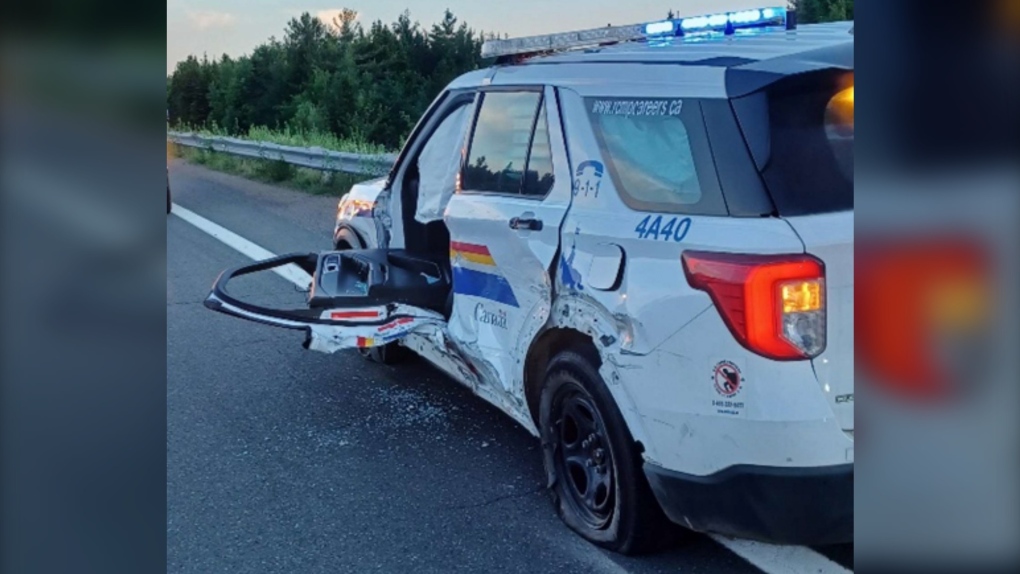 A damaged Royal Canadian Mounted Police vehicle is seen in Tracadie, N.B., in a June 29, 2022, handout photo. A 50-year-old New Brunswick woman is facing an impaired driving charge following a head-on collision with a fully marked RCMP vehicle in the village of Tracadie. THE CANADIAN PRESS/HO-RCMP
TRACADIE--SHEILA, N.B. -

A 50-year-old New Brunswick woman is facing an impaired driving charge following a head-on collision with a fully marked RCMP vehicle in the village of Tracadie.

The Mounties say the collision occurred June 29 around 8:20 p.m. on Route 11 when an SUV was travelling the wrong way on an off-ramp.

The police vehicle sustained major damage, trapping the officer inside.

The driver of the SUV fled the scene but she was found in tall grass about 300 metres away.

The suspect was uninjured and the officer sustained minor injuries.

This report by The Canadian Press was first published July 2, 2022.

Pennsylvania state police say a man who was upset about an argument with his mother drove through a crowd at a fundraiser for victims of a recent deadly house fire, killing one person at the event and injuring 17 others, then returned home and beat his mother to death.