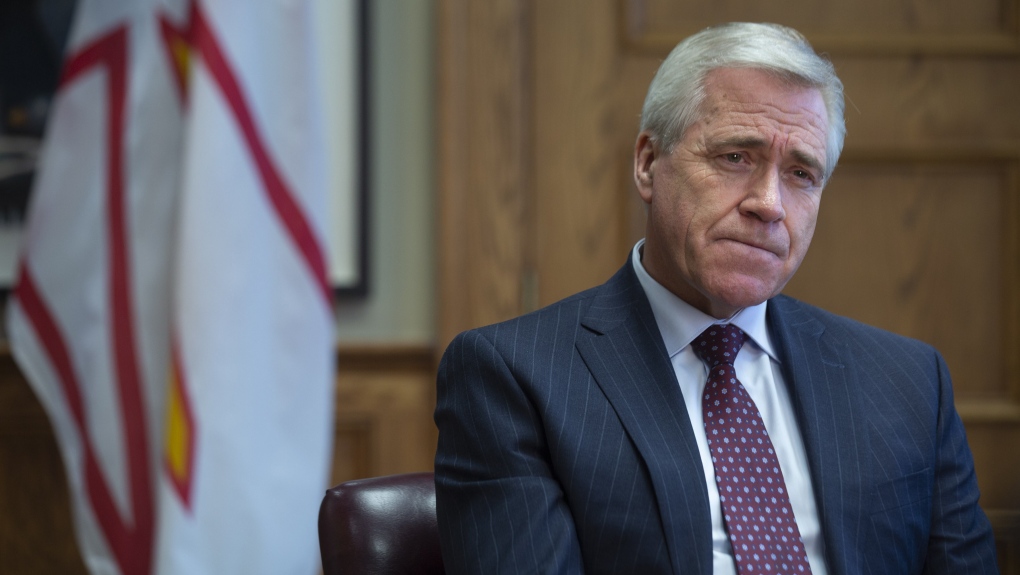 Newfoundland and Labrador Premier Dwight Ball poses in his office at the Confederation Building in St. John's on Tuesday, February 18, 2020. Newfoundland and Labrador's 14th premier will be announced Monday at a party leadership convention that has forced organizers to get creative with pandemic restrictions on crowds. Online and telephone voting began this week to elect the next leader of the Liberal Party of Newfoundland and Labrador, with 34,000 people eligible to cast figurative ballots for one of two men in the running to replace Ball.THE CANADIAN PRESS/Paul Daly

ST. JOHN'S, N.L. -- Newfoundland and Labrador's 14th premier will be announced Monday during an unusual party leadership convention coloured by the COVID-19 pandemic.

Only 50 people will be allowed inside the event to welcome the next leader of the Liberal Party of Newfoundland and Labrador due to the province's restrictions on large gatherings. The tight limit has forced organizers to get creative and take tough decisions about who will make the list.

"It would be nice if we could have 1,000 people ... with all the hooting and the hollering that goes with a leadership convention," said Judy Morrow, a member of the leadership election committee, in a recent interview. "But you have to work with the times and the circumstances that we're dealing with."

Premier Dwight Ball is stepping down, and one of the two men vying to replace him as leader of the Liberals will become premier. The party's 34,000 eligible voters began voting last week online and by telephone.

The candidates are Andrew Furey, a physician and charity founder with family connections to Ottawa, and John Abbott, a former civil servant and CEO of the Newfoundland and Labrador branch of the Canadian Mental Health Association. Neither has held elected office, and the winner will guide the country's easternmost province through a challenging period, staring down a $2.1-billion deficit presented in a fiscal update last month.

The winner will take the stage Monday evening at the St. John's Convention Centre but none of the Liberal caucus will be there. Ball is scheduled to make remarks virtually from Deer Lake, N.L., on the island's west coast.

Between candidates and their families, convention centre staff, campaign workers, journalists and party brass, "it doesn't take long to come up with 50 people," said Morrow, who is also a former party president.

The Liberals are considering running the show without a teleprompter -- and the person required to manage the technology -- as a way to find one extra place for a body. Scrutineers and the election auditor will work out of a nearby building.

Monday's leadership election will be the first event hosted at the convention centre since the pandemic started, according to Morrow, who said planning the celebration is like working with a moving target. Those in attendance will be spaced out across the vast ballroom that was designed for bigger crowds.

Despite the challenges that come with running an election during a pandemic, registration numbers indicate people are excited to choose the next leader.

Thousands more people have signed up to vote compared with the Liberals' leadership election in 2013, the party says. Close to 10,000 votes had already been cast by Thursday afternoon and 1,000 people were registered to participate in Monday's virtual annual general meeting.

"These are just really, really good numbers," Morrow said. "We're just so thrilled and so pleased that the public are so engaged."

After he is sworn in, the new premier is required by law to call a general election within a year.

Both candidates have said they aren't in a rush to trigger a vote before the end of 2020, saying they will consult with the other two party leaders in the legislature to choose a date.

The opposition, meanwhile, is gearing up. The Progressive Conservative party is opening candidate nominations across the province and plans to hold a general meeting in October.

Monday's winner will need to quickly turn his attention to the provincial budget, which is expected to be tabled in September. This fiscal year's deficit has already jumped by $1.35 billion since the budget was tabled, due primarily to plummeting oil revenues and pandemic-related costs.

Furey, son of current Senate Speaker George Furey, is widely seen as the front-runner, following public endorsements from the sitting Liberal caucus. The 45-year-old has pledged to create the position of "chief economic recovery officer" to help tackle the province's fiscal challenges.

Furey said working with Ottawa will be key to sorting out the province's money woes, and he points to his experience in business, charity organizations and working with others as evidence he is prepared for the job.

"It's a call to the best and the brightest, and I've seen the power of teamwork and navigating difficult situations and I think I can use that in transition to governing," Furey said in an interview last month.

Abbott, 63, has taken a tougher stance against Ottawa compared with Furey on issues such as rising electricity rates. In a July interview, Abbott said his public service experience has shaped his understanding of the challenges facing the province and prepared him for the leadership.

"I'm looking forward to ... building cabinet, working with caucus, reinvigorating the bureaucracy to look at this as a challenge for a lifetime," he said.

This report by The Canadian Press was first published August 2, 2020.