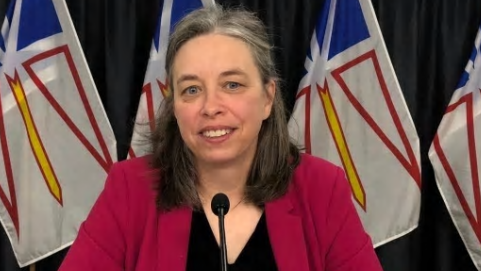 Chief medical officer of health Dr. Janice Fitzgerald says there are now 19 cases associated with a cluster in the northern Newfoundland town of Roddickton, where just 60 per cent of eligible residents have received a first dose of vaccine.
ST. JOHN'S, N.L. -

Newfoundland and Labrador will be rolling out a vaccine passport in October but it won't be mandatory, the province's health minister said Wednesday, despite other Atlantic provinces tightening health restrictions and requiring proof of vaccination.

It will be up to businesses to decide whether they use the province's vaccine passport system, John Haggie told reporters, seemingly contradicting Premier Andrew Furey, who announced last week the passport system would be modelled on the one Quebec introduced -- which is mandatory.

Quebec requires people show proof of vaccination before they can enter businesses the government deems non-essential, such as bars, restaurants and gyms.

Haggie on Wednesday suggested any confusion "may be a matter of semantics." He said Newfoundland and Labrador's passport system will use the same technology as Quebec's.

"My understanding was the Quebec app was being used -- the Quebec software that is in the process of being adapted to Newfoundland and Labrador's IT infrastructure in terms of the use of the vaccine passport," Haggie said.

His remarks came as New Brunswick Premier Blaine Higgs on Wednesday said his province would require residents to produce proof of COVID-19 vaccination to access services such as indoor festivals, bars, restaurants and gyms beginning next week.

And while Haggie said his province's proof-of-vaccination system will be voluntary, that may change under special circumstances.

"We have not mandated vaccines for anybody," Haggie said. "There may, depending on epidemiology and circumstances of case counts where public health recommends we go to a lockdown in a certain area, I think under those circumstances there may be conditions where using the vaccine passport could be mandatory under a (special measures order)."

The province's chief medical officer of health, Dr. Janice Fitzgerald, reported 10 new cases of COVID-19 Wednesday and 49 active infections across the province. Nineteen infections are now associated with a cluster in the northern Newfoundland town of Roddickton, where just 60 per cent of eligible residents have received a first dose of vaccine, Fitzgerald said.

By contrast, online government data shows nearly 78 per cent of Newfoundlanders and Labradorians 12 and up were fully vaccinated and more than 87 per cent have received at least one dose of vaccine.

Another cluster in the eastern region of the province has been linked to large indoor gatherings where people were not wearing masks, Fitzgerald said.

"While I understand that it is concerning to see emerging clusters in cases, it is expected with the fourth wave still underway outside the province," she said. "Atlantic Canada as a whole is starting to see the impacts of the fourth wave, with 327 new cases reported across the region in the last week."

Public health officials are watching the situation closely and are ready to reintroduce travel restrictions or other measures if necessary, Fitzgerald said. The province will also offer a third dose of the Moderna or Pfizer-BioNTech COVID-19 vaccine to residents who are moderately to severely immunocompromised, as per the latest advice from the National Advisory Committee on Immunization, she added.

This report by The Canadian Press was first published Sept. 15, 2021.