N.L. town of 30 people is connected to Boston 4th graders after rescue of tiny boat 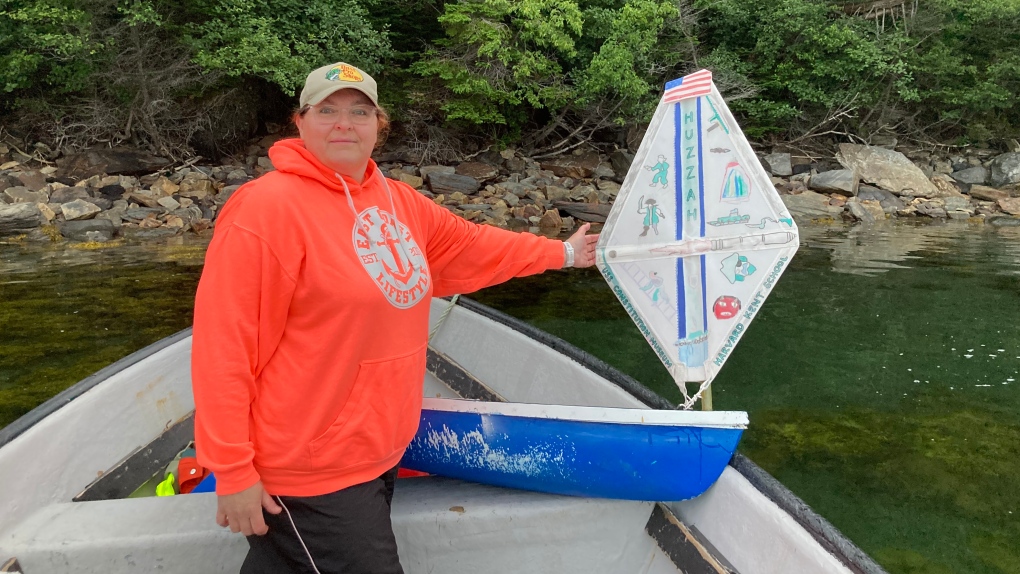 Sherrie Feaver, shown in this handout image on Thursday July 22, 2021, of the town of McCallum, which sits along Newfoundland's remote southern shore, said she was so excited to head out morning to find the HK Pride, a six-foot ship made by fourth grade science students at Harvard-Kent Elementary School in Boston, Massachusetts. THE CANADIAN PRESS\HO-John Feaver

ST. JOHN'S, N.L. -- A tiny shipwreck on a nearly deserted Newfoundland coast has brought together a small fishing community and a group of fourth graders from a bustling American city.

The six-foot-long HK Pride was built by students from the fourth-grade science class at Harvard-Kent Elementary School in Boston, Mass., in partnership with the city's USS Constitution Museum. The small ship equipped with a GPS tracking device was launched into the Gulf Stream off Cape Hatteras in North Carolina on May 4.

After 75 days at sea, tropical storm Elsa blew in and the ship ran aground on a rocky shore near McCallum, N.L., a town inaccessible by road and with a dwindling population.

On Monday, the Boston museum sent a Mayday through Twitter about the wreck, asking anyone nearby to help retrieve it.

"We don't know this part of the world and we we're looking at the satellite maps and we're like, `Oh gosh,"' Emily Bryant, the museum's education manager, said in an interview Thursday. "We didn't have high hopes because it did seem so remote."

But early Thursday morning, people in McCallum set out in their own boats to go looking for the vessel and it didn't take them long to find it.

"I was joking that Poseidon has favoured our little boat," Bryant said.

The museum Bryant works for is dedicated to another ship, the USS Constitution, known as Old Ironsides and said to be the world's oldest ship still afloat. Bryant said the museum partnered with the science class to build the HK Pride as a way to help the kids build connections with students and interesting places across the globe.

McCallum, an isolated, nearly empty community along Newfoundland's vast and exposed southern shore, certainly fits that bill, she said -- even if there are only two students in town.

The community is one of six along the south coast only accessible by air or by ferry. Residents have been steadily moving out and the town has held votes about being resettled through a provincial government program. The 2016 census recorded the population at 73, but Sherrie Feaver, who was the first to retrieve the HK Pride Thursday morning, says these days, there are about 30 residents left.

When news of the boat hit social media, Feaver said, everyone in town was excited. "We were going to try yesterday but it was a bit windy," she said in an interview Thursday. "I didn't even sleep last night because I was like, 'Oh my gosh, I wonder where we'll find it."'

She and her husband set out in their own boat just before 6 a.m. Thursday morning, she said. After travelling along the shore for 40 minutes or so they saw it washed up on a rocky beach. "She's a little bit damaged -- not a lot, just a bit on the bow," Feaver said. With all that empty coastline for the boat to land, Feaver said it's quite a stroke of luck it wound up near people.

By Thursday afternoon, the HK Pride was sitting on the Feavers' lawn, waiting to be picked up by the federal Fisheries Department, she said. It'll be taken for repairs and brought to a school in Harbour Breton, N.L., about 80 kilometres away.

"I think they wanted to get the students here but now we only have two," she said, adding that she's thrilled to have a connection with the kids in Boston and happy they'll know about McCallum.

As for the HK Pride, it's one of many ships built through a program offered by the Maine-based non-profit Educational Passages.

"Not every boat in this program meets a positive fate," Bryant said. "This boat did great for travelling 75 days at sea, up the eastern seaboard and through a tropical storm. She still has a lot of life left in her."

This report by The Canadian Press was first published July 22, 2021.