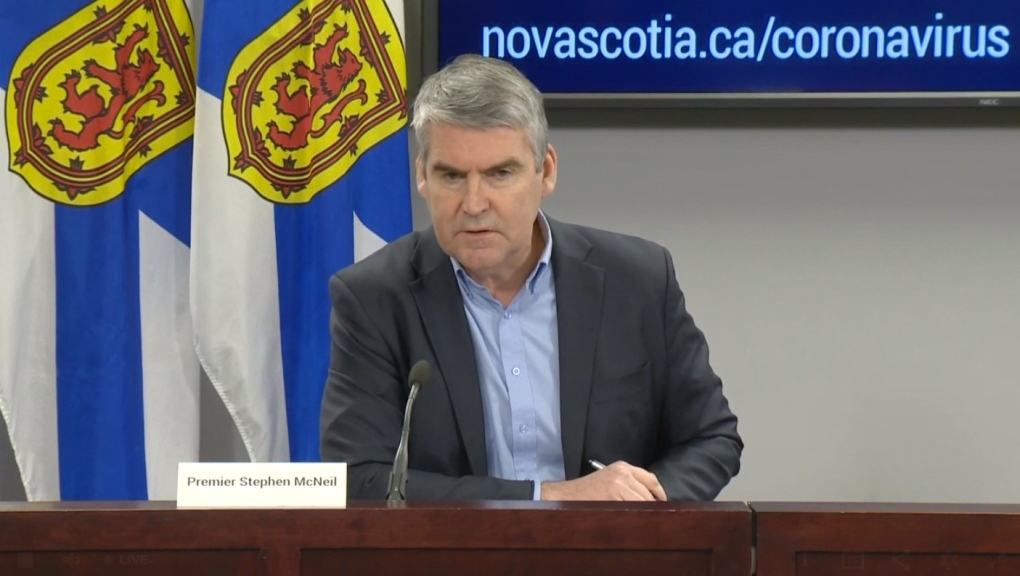 Nova Scotia Premier Stephen McNeil provides an update on COVID-19 during a news conference in Halifax on April 2, 2020.

HALIFAX -- The Nova Scotia government has announced new measures it says will help small businesses and workers hard-hit by the COVID-19 pandemic.

“Our small businesses and the self-employed have always been the backbone of our economy, but now with COVID-19 being here, layoffs and closures have slowed the pace of our economy,” said Premier Stephen McNeil during a news conference Thursday.

“People are scared and we want to try to reduce some of that fear.”

McNeil announced a $20-million Worker Emergency Bridge Fund, which he says will help people who are self-employed, as well as laid-off workers who don’t qualify for Employment Insurance.

The province will provide a one-time $1,000 payment to help bridge the gap between layoffs and closures and the federal government’s Canada Emergency Response Benefit.

“The goal is get the money into the hands of the impacted workers as quickly as possible,” said McNeil.

McNeil also announced a $20-million Small Business Impact Grant. Eligible small businesses and social enterprises will receive a grant of 15 per cent of their revenue from sales, either from April 2019 or February 2020, up to a maximum of $5,000.

The province says the flexible, one-time, upfront grant can be used for any purpose the business deems necessary.

“We also recognize that so many of our small businesses have either been forced to shut down or substantially curtail operations due to public health orders. We know they need help now,” said McNeil.

“If you are a small business that just opened in the midst of COVID-19, you can still apply and we will work with you.”

Eligibility for the programs is not affected by a person or business being enrolled in another provincial program or the federal initiatives.

The Worker Emergency Bridge Fund and Small Business Impact Grant are coming out of a new $50-million fund that will be administered by Dalhousie University.

“Dalhousie has all of the mechanics to be able to move through this with their business school,” explained McNeil.

“We'll be using some of their students in finance and other departments. As well, we’re bringing in some of their sister institutions, students from around HRM, to be able to help us implement this change.”

McNeil says the goal is to begin processing applications early next week. Information on where and how to apply will be made available online.