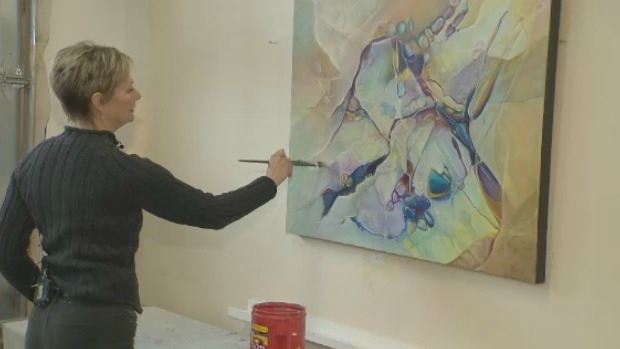 Monika Wright is a self-taught artist who creates colourful paintings that channel the world around her.

An award-winning Halifax-based artist has been selected to showcase her work at a national art fair in Toronto.

Monika Wright is a self-taught artist who creates colourful paintings that channel the world around her.

Wright works out of her studio in Upper Tantallon, N.S., creating colourful and abstract paintings inspired by her personal experiences.

“Everything has that fluidity here and that open and airiness, so I think that might have influenced me,” says Wright.

Wright’s work has been featured in several countries and three continents.

She's been painting on a full-time basis for nearly a decade and says she originally sought refuge in art after suffering a personal loss.

“I just found that painting was a way for me to escape into a realm where nothing else exists, grief didn't exist, pain didn't exist, sadness, anger,” says Wright.

Wright says she hopes her work will also allow others to escape and to inspire creativity.

“I create it and I expect, I hope, someone else will sort of look at it, enjoy it, play with it with their own imagination,” says Wright.

Wright’s art has taken her many places and she's just days away from jetting off to Toronto where she’ll be featured as one of Canada's top contemporary artists at the 2016 Artists Project.

“Even last year, during the blizzard they had during the show, they had over 10,000 people attend, so hopefully it goes well,” says Wright.

Wright’s artwork will be displayed alongside nearly 250 other artists from Canada and abroad.

“I'm contributing, and I'm doing what I love, and hopefully doing what makes people happy. So that's what it is, that's my purpose,” says Wright.