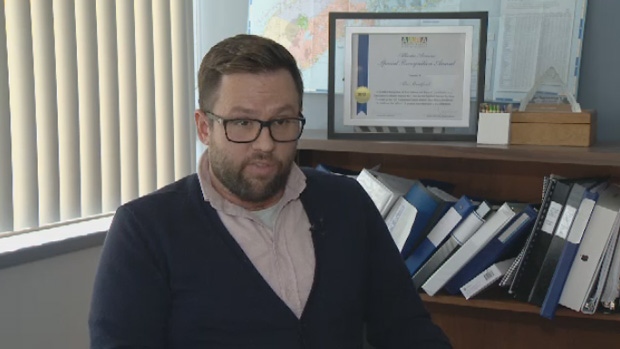 "In Nova Scotia the situation is getting worse, not better," said Alec Stratford, director of the Nova Scotia College of Social Workers, It's the only province to see child poverty levels grow, as wages remain stagnant," he said in his opening statement."

HALIFAX -- A coalition of 19 groups is banding together to pressure Nova Scotia's Liberal government to replace what they call "trickle down economics" with measures to reduce rising poverty.

The Nova Scotia Action Coalition for Community Well-Being announced its creation Monday during a news conference at the provincial legislature hosted by the NDP.

Member groups include the Nova Scotia College of Social Workers; the Women's Centre Connect, which includes nine women's centres across the province; and the Community Advocate Network, a lobby group formed by citizens living in poverty.

She wrote in a recent article in The Conversation that Statistics Canada figures show the province has the highest rate of child poverty - more than one in five children live in poverty - and it is the only province where these rates have increased in the latest surveys.

This has occurred despite the introduction across Canada of improvements to the Canada child benefit program - which has helped reduce child poverty significantly in other provinces.

Alec Stratford, director of the Nova Scotia College of Social Workers, told reporters the province has to shift to policies that include increasing minimum wage, basic income assistance and improving housing services to reverse this rise in poverty.

"In Nova Scotia the situation is getting worse, not better. It's the only province to see child poverty levels grow, as wages remain stagnant," he said in his opening statement.

"When we continue to have decisions based on balanced budgets, competitive taxes and the dogma that a trickle down economy will benefit all, this is where we start to see inequality grow."

The Liberal government provided a written response, saying it had made "significant investments over the last number of years to help Nova Scotians achieve income security." The Department of Community Services says a variety of changes to its employment support and income assistance program have helped the poor.

It says in recent years it has allowed people with larger amounts of savings and other assets to qualify for income assistance, increased the monthly personal allowance by $20 per month, and removed child support payments from eligibility calculations.

The department says there are also plans to move welfare recipients "to the maximum amount they are eligible for" and for rate increases for all recipients, including five per cent for single people with disabilities who don't have children, those fleeing domestic violence, those who are 55 years and older and youth aged 16 to 18.

Everyone else will see a two per cent increase.

However, Amy Moonshadow, the chairwoman of the Community Advocate Network, said during a news conference that measures taken to date by the provincial Liberal government haven't gone far enough to ensure basic food security for many of its poorest citizens.

She said an adult person with disabilities must attempt to live on $821 per month, which isn't sufficient to purchase necessities after rent is paid.

"We are looking for more than adequacy. We want to live like humans," she added.

Other groups in the coalition include the Schizophrenia Society of Nova Scotia, the Canadian Centre for Policy Alternatives, the Nova Scotia Association for Community Living, the Society of Saint Vincent de Paul and CUPE Nova Scotia.

Stratford said in the past the various agencies have sometimes worked at cross purposes or been pitted against one another by provincial officials.

The coalition will help create a focused message and bring a clearer focus to policies aimed a reducing poverty, he said.

Across Canada, Statistics Canada figures show the percentage of children under the age of 18 who live in low-income households dropped to nine per cent in 2017 from 13.3 per cent two years earlier, resulting in 278,000 fewer children living in poverty.

However, in Nova Scotia, child poverty levels increased to 17.1 per cent from 15.7 per cent over the same period, according to the surveys.

A study carried out by the Food Action Research Centre at Mount Saint Vincent University in 2015 found that in Nova Scotia a household of four living on income assistance would run a deficit of $986 monthly if it were to purchase a "basic nutritious diet."

If the family was surviving on minimum wages in the province, it would run a deficit of $418.

Patricia Williams, director of the centre, said in an interview that, if anything, the situation has worsened in recent years as modest increases to income assistance haven't kept pace with the rising cost of rent and food.