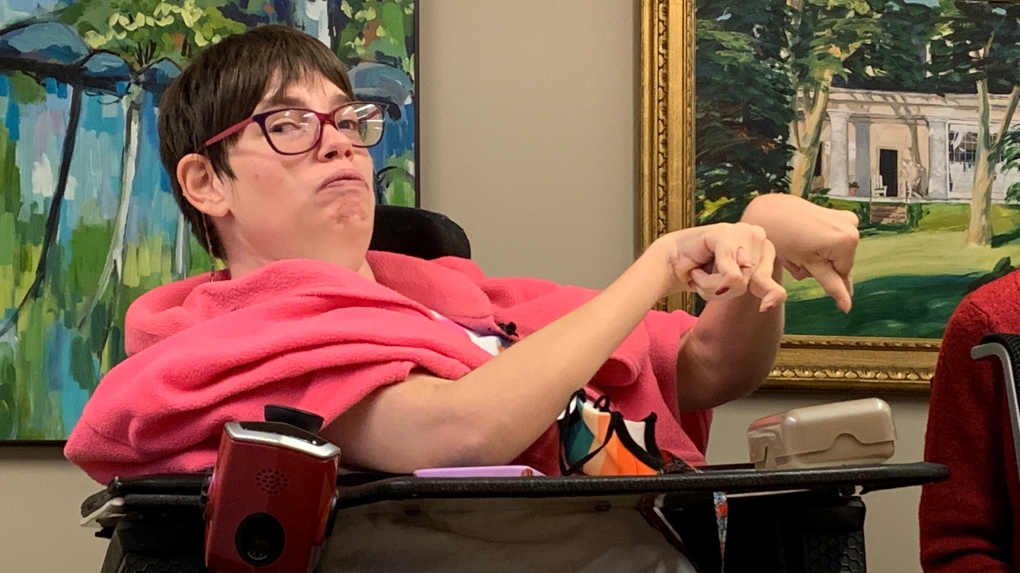 Vicky Levack, a spokeswoman for the Disability Rights Coalition, speaks at a news conference in Halifax on Wednesday, Dec. 1, 2021. THE CANADIAN PRESS/Michael Tutton
HALIFAX -

A disabilities group in Nova Scotia said Wednesday it would push to convert a recent landmark court victory into funding for improvements to housing and to care.

During a news conference, the Disabilities Rights Coalition cited the Oct. 6 decision by the Court of Appeal, which determined the province had failed to provide people with disabilities proper social assistance and suitable homes in their communities.

The specific remedies to the finding will be determined by a human rights board of inquiry, but the province has the option to attempt to "justify" the discrimination on grounds such as potential costs.

Vicky Levack, a member of the coalition, told reporters she was looking for Premier Tim Houston to promise not to go down the legal path, as it would likely cause years of delays.

Having been forced to live in a nursing home for years because of a shortage of smaller homes in the community with suitable support, Levack -- who has cerebral palsy -- said she didn't want others to face the same obstacles.

"Now that I know this is technically illegal and not just morally wrong, I'm twice as mad and I look forward to a remedy as quickly as possible," she said.

The coalition also said it was looking for the new Progressive Conservative government to collaborate with their group before the human rights board, to commit to reforms and to set up a timetable for their achievement. The group has said reforms should include an end to institutionalizing people with disabilities and include the rapid elimination of waiting lists for community housing.

Milt Isaacs, the father of a son in his 30s who has disabilities, said Wednesday that if the province determines to follow the route of legal obstruction or protracted talks, then it would once again damage parents who have waited years for assistance.

"It requires funding," Isaacs said. "We know that, but the money is there and they can make this happen. Let's do the right thing, for once."

Dulcie McCallum, who was a member of Canada's delegation to the United Nations Convention on the Rights of Persons with Disabilities, told the news conference that if Nova Scotia doesn't act on the court decision, it could result in a formal complaint to the UN.

"My message to the premier today, on behalf of thousands of people languishing in institutions and nursing homes, is that you're guilty of unreasonable delay and what sits on the horizon is a potential complaint," she said.

The coalition said that after they announced they were holding a Wednesday news conference, the premier's office sent an email inviting its representatives to meet with the premier next week.

Claire McNeil, the lawyer for the Disability Rights Coalition, said the group will pursue the human rights process to ensure there are written guarantees of reform. She said it's clear from the court decision that anyone who doesn't want to be in an institutional setting and wants to live in the community is now entitled to do so.

McNeil also said her group will push to end the practice of having people move far from friends and family to have a place to live.