Janelle Hewitt loves to shop at IKEA. She lined up for four hours to ensure she would be one of the first people to see inside the new store in Dartmouth. She has returned to browse and draw inspiration from their display rooms almost every week since, so you can imagine Janelle’s excitement when she learned she was the winner of CTV’s IKEA Living Room Makeover contest.

“I was in disbelief, I could not believe that I won,” says Janelle. “I’m a huge IKEA fan and I was so excited.”

Janelle and her husband, Matt Szeto, bought a house in Kinsac, N.S., three years ago and were excited to modernize their new home.

“We have done a bit of the cupboards in the kitchen and we did the backsplash,” says Janelle. “We opened a wall, we’ve done upgrades to the heating, the deck, the kitchen countertops.”

Soon after moving in the couple had their daughter Meira, and they have since welcomed a second daughter, Jemma.

The cost of caring for two little ones, along with some unexpected renovation expenses, put home décor on the backburner.

“The kitchen was one of the things we wanted to tackle first, and we did that, and now we never really got around to the living room,” says Matt. “We had to change our whole water system, we had to change our roof and there was other little things that kind of got in the way.”

“We haven’t done anything to the living room so far and it’s really a sin, because that’s where we spend most of our time as a family and it is in desperate need of some organization and some storage,” says Janelle.

When asked what they’d most like to see in their new living room, storage topped the couple’s wish list.

“You know, we have toys everywhere. We’d like a place to neatly tuck them away, so they are kind of out of view, but the kids can have access to them if they want them,” says Matt.

The couple is also hoping for an update to the most prominent feature in the room, the fireplace.

“We like the fireplace, but we’d like something done to it. We had plans to do that, but like we said, things kind of got in the way,” says Matt. “I’ve been trying to mount the TV on the wall, or get around to it, but I haven’t done that. So if we could get that mounted up on the brick, that would be amazing.”

Designer Marcy Mussari was the winner of the competition show “The Search For Canada’s Next Designer” and secured a contract with IKEA Canada as part of her prize.

Her passion for creating special spaces and her love for IKEA products made Marcy the perfect person to tackle Janelle and Matt’s living room.

“When I found out Marcy was doing it, I was even more excited,” says Janelle.

“I know that it is hard when you have a few kids and a busy schedule to create your dream home, so I hope that I’m able to achieve that for them,” says Marcy.

The first change Marcy made to the space was to modernize the outdated fireplace.

“We started with painting the old fireplace a beautiful charcoal colour. I think it makes a great statement for the room,” says Marcy. “We also mounted the TV on the fireplace.”

Marcy says DIY art projects are a great way to add personality to your space.

“Make the artwork as abstract as you want. If you want, you can make this (DIY art project) a fun craft night with the kids, make it a family project,” says Marcy. “Add colour, use different brush strokes, some thick, some thin. Have fun with it.”

Designers are often asked how to decorate bookcases or shelves. Marcy says there are some simple tips so you can style like a pro.

“Use items like vases, storage tins or boxes, incorporate greenery, and add a personal touch with art,” says Marcy. “It’s also really nice to bring in some neutrals and some wood, as well as some glass, so it doesn’t feel so heavy.”

The finishing touch to every room is adding the accessories.

“Styling the room adds personality and makes it feel homey,” says Marcy. “You can do this by adding candles, pillows, throws, and window treatments.”

With the transformation of the room complete, it’s time to allow the homeowners to return.

“I’m so excited, I worked so hard on this and it turned out exactly as I pictured it,” says Marcy. “The fireplace is now a beautiful focal point in the room, we painted it a nice charcoal, and we did all the trim the same colour,” says Marcy. “There’s a seating area now for company, a conversation area.”

Janelle and Matt were overwhelmed by the change in their living room.

“It’s beautiful, oh my gosh,” says Janelle. “This is better than I could have dreamed of. Marcy did an incredible job, we’re so happy.”

“It didn’t even look like our home anymore. It looked like we walked into a totally different house,” says Matt.

Janelle says the layout of the room is her favourite part of makeover.

“I never would have thought to do that and then, of course, every single piece in here is also my favourite part,” says Janelle.

“I really like the fireplace area, with the TV on the wall there, and just the amount of storage that is in here now,” says Matt.

The couple says the abundance of storage in the room will make their lives easier.

“It’s just going to be so much easier to keep clean and when people come over I’ll be able to quickly put things away,” says Janelle.

With a stylish living room and happy homeowners, Marcy’s job is complete.

“I’m so happy to have had this opportunity to create this beautiful living room for Matt and Janelle with IKEA Canada. This is the perfect space for them to grow as a family, to entertain, and to maybe even watch a movie on a Friday night. I love the way that it looks and I’m thrilled that they love it too.” 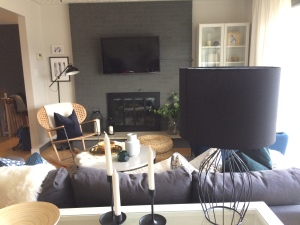