N.S. flag that flew with Snowbirds being auctioned as fundraiser in memory of Capt. Jenn Casey 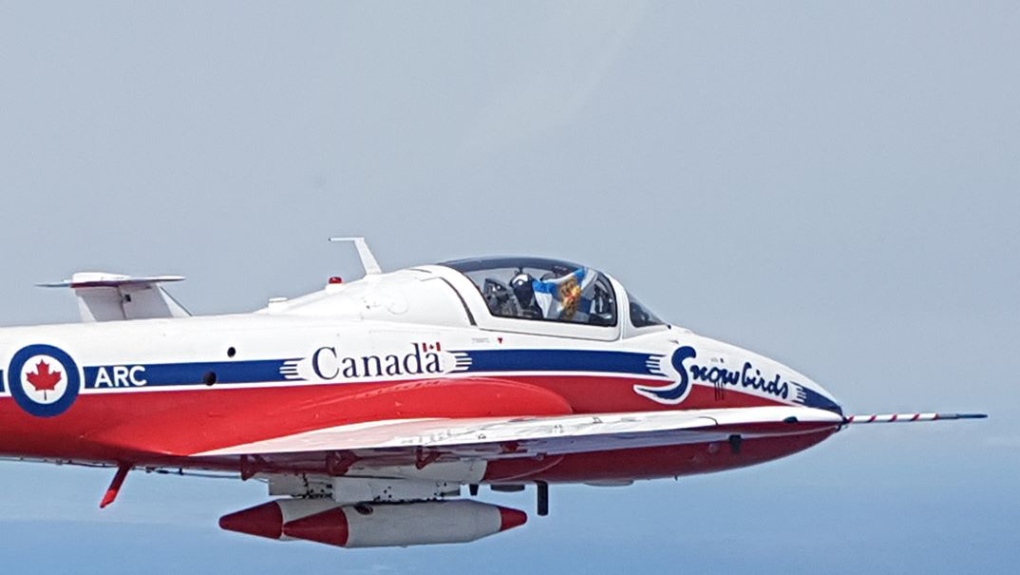 Cpl. Matt MacKenzie is auctioning off the Nova Scotia flag he recently carried with him during Canadian Snowbirds Operation Inspiration in memory of Capt. Jenn Casey. (Photo: Geremey Luivi)

HALIFAX -- A Nova Scotia flag that flew inside one of the Snowbirds' jets during their recent flight over the Maritime province as part of Operation Inspiration is being auctioned off on eBay as a fundraiser in memory of Capt. Jennifer Casey, who died in a plane crash earlier this month.

"I know the flag meant a lot to me, I knew I wanted to do something with it, and with the unfortunate outcome of the plane crash, I couldn’t think of a better way to honour Jenn then by auctioning it off,” says Cpl. Matt MacKenzie, who works as an aircraft structural technician for the Canadian Forces Snowbirds.

A native of Truro, N.S., MacKenzie has friends and family who were affected by the mass shooting, which claimed the lives of 22 Nova Scotians in several communities on April 18 and April 19.

After the shootings, MacKenzie hung a Nova Scotia flag outside of his home in Moose Jaw, Sask., to let Nova Scotians know he was thinking of them from afar.

But when the Snowbirds announced "Operation Inspiration" -- a cross-country tour aimed at boosting the spirits of Canadians during the COVID-19 pandemic -- MacKenzie knew he would be bringing the flag closer to home.

“I didn’t know the weight it would carry, bringing the flag with me and flying it over Nova Scotia,” says MacKenzie.

MacKenzie flew the flag over his home province on May 3, as the Snowbirds began their tour by flying directly over Portapique, N.S., where the two-day mass shooting began the night of April 18.

“Looking down and knowing I had friends and family members down there, it was one of the most emotional experiences I have ever felt in my life,” said MacKenzie. “When I landed, I posted the photo and it just blew up like wildfire, so that was a good indicator of how tight-knit Nova Scotians are of people, and how close we are.”

That was something that he discussed with his close friend, Capt. Jenn Casey.

“I remember Jenn and I were especially proud that we were letting people on the ground know that there were Nova Scotians up here as well, and we’re thinking of you,” recalls MacKenzie.

While most of the Snowbirds hail from western Canada, MacKenzie says he and Casey represented Nova Scotia with pride.

“I’d tell them, 'you guys have the mountains and everything, but we have the people,’ and they really saw what I meant when we went out east,” says MacKenzie. “I knew we were always extremely proud people, but the past few weeks, it’s been amazing, and it’s nice to show the whole world Nova Scotia, and how resilient we are. We’re still standing proud and strong together and it makes me so proud to see that.”

Two weeks later, on May 17, Casey -- a 35-year-old military public affairs officer and Halifax native -- died when the CT-114 Tutor jet in which she had been flying with the Snowbirds crashed in a residential neighbourhood in Kamloops, B.C.

“It didn’t feel real, she was such an important facet of our team, such a happy, go-lucky, smiling person,” remembers MacKenzie.

“Myself and (fellow Snowbird and Casey’s boyfriend) Capt. Scott Boyd really came together and we’ve been looking after each other. We’ve gotten amazing support from our military family, and many Canadians reaching out with their thoughts and how they can ease the pain.”

MacKenzie says he knew he wanted to do something special with the flag after Operation Inspiration. When Casey died, it became clear that he would auction it off in her honour.

“I’m just trying to do something right for Jenn and on behalf of her, it's all about doing something positive in her name, because she would have done any of this for any of us in a heartbeat,” says MacKenzie.

As of Thursday afternoon, the highest bid was over $2,200, with a week remaining in the online auction.

"I’ll go to bed at night, and it's at one number, and it’s the first thing I check in the morning and it's always jumped up. It's great to see," says MacKenzie. “I’m going to offer the option as well, to have the whole team sign the flag, if that’s what the winner of the auction wants,” he said.

All proceeds from the auction will go to the Nova Scotia SPCA.

“Jenn is a huge dog lover, big animal lover, so it’s super fitting to donate to the SPCA,” said MacKenzie.

MacKenzie is encouraging supporters to make a donation to their local animal shelter, and shared a message from Casey’s family as to the best way to pay tribute to her.

“Rather than buy flowers for a memorial, donate that money to your local animal shelter. If you’re not in a position to donate, just open a local beer in your backyard and listen to The Tragically Hip and reflect.”

A touching tribute to a close friend from a fellow proud Nova Scotian.