N.S. groundhog predicts an early spring after not seeing shadow 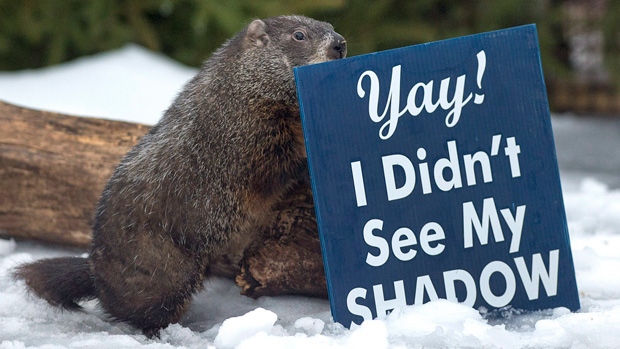 Shubenacadie Sam looks around after emerging from his burrow at the wildlife park in Shubenacadie, N.S. on Friday, Feb. 2, 2018. Sam failed to see his shadow and predicts an early spring. (THE CANADIAN PRESS/Andrew Vaughan)

Canadians could be in for an early spring after one of the country's best-known groundhogs failed to see his shadow.

Nova Scotia's famed Shubenacadie Sam waddled out of his fenced pen at about 8 a.m. local time and wandered around, a sign he was predicting an early end to winter.

Fans looked on and let out loud cheers as Sam, who lives at the Shubenacadie Wildlife Park, scampered around the snowy grounds on what was the 30th anniversary of his annual weather prediction.

In Ontario, a new Wiarton Willie is expected to emerge from his den at about 8 a.m. ET, if past years are anything to go by.

This year's groundhog is an "understudy" to the previous Willie, who died last September.

Folklore has it that if a groundhog sees his shadow on Groundhog Day he'll flee to his burrow, heralding six more weeks of winter, and if he doesn't, it means spring's around the corner.