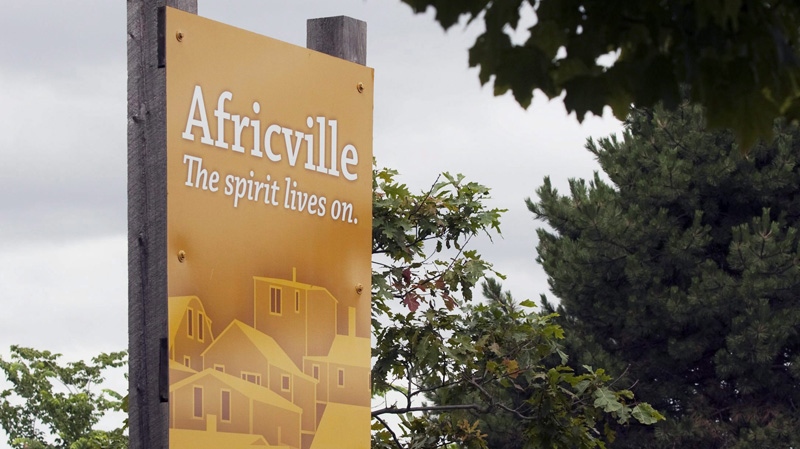 A new sign was unveiled at a ceremony to rename Seaview Park to Africville in Halifax on Friday, July 29, 2011. (THE CANADIAN PRESS/Andrew Vaughan)

HALIFAX -- A Nova Scotia Supreme Court judge has denied a proposed class-action lawsuit seeking compensation for the expropriation of land in Africville more than five decades ago -- but he has not shut the door entirely on the legal action.

Former residents of the former African Nova Scotian community were seeking compensation through a class action brought by former resident Nelson Carvery. First settled in the mid-1800s, Africville was demolished in the 1960s in the name of urban renewal.

The demolition cast a long shadow over race relations in the city, and in 2010, city hall issued a public apology and $3 million to rebuild the Africville church on the southern shore of the Bedford Basin, among other things, but the settlement did not include personal compensation.

The Carvery suit sought liability on the part of the City of Halifax, damages and costs.

But Justice Patrick Duncan dismissed the application, saying in his decision last Friday that the plaintiff had failed to satisfy the requirements of the Class Proceedings Act.

"I am not satisfied that the proposed definition of a class member ... would identify persons who have a potential claim for relief against the defendant," he wrote in his 34-page decision.

"The motion for certification of the action and appointing the plaintiff, Nelson Carvery, as representative plaintiff is denied."

But Robert Pineo, Carvery's lawyer, said Wednesday that the motion for certification will be amended based on the judge's findings and will be heard again at a future date.

He said the information in the decision will help refine the argument.

"The certification process allows the representative plaintiff to amend its motion for certification and have it heard again," he said in an email. "In a sense, this first motion decision has assisted my clients with the next motion."

Pineo said he is in the process of refining the issues, but it's not yet clear when the matter will return to court.

Carvery claimed former residents and their ancestors had communal land wrongfully expropriated by the city. He argued in his affidavit that community members used the land on the shores of Halifax harbour for fishing, farming, recreation and gathering berries.

The decision says the case dates back to 1996, when a statement of claim was filed by 129 plaintiffs against the City of Halifax. The group argued that the city was liable to the former residents for breaches of contract and owed them damages "for the loss and injury claimed to have been suffered" as a result of the municipality's actions.

The settlement was reached in 2010.

But, some plaintiffs disagreed and went on to pursue the claim with Pineo representing them and Carvery named as the plaintiff. The class would include all former residents who were removed from the community between 1962 and 1970 who hadn't had their claims dismissed previously.

The defence argued that Carvery failed to establish that all members were land owners or that they would claim a communal use of the land.

Carvery contended in his affidavit that his father owned six parcels of land in the community and refused to sell them to the city in 1969. He claimed that no compensation was paid for any of that land in the 1960s, when residents were evicted and homes and the original church were torn down to make way for the MacKay Bridge.