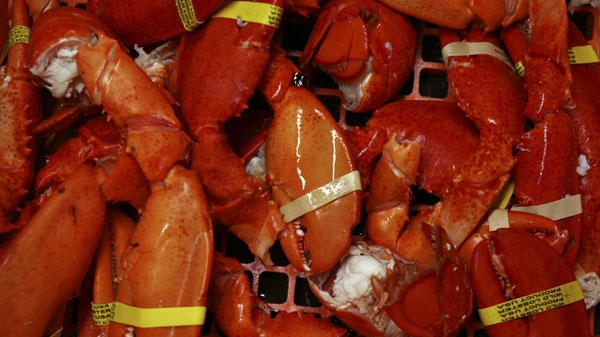 Cooked lobster claws and tails are seen at a lobster dealer in this 2008 file photo. (THE CANADIAN PRESS / AP Photo-Pat Wellenbach)

HALIFAX -- The owner of a lobster pound in Nova Scotia who was convicted of illegally selling lobster harvested by Mi'kmaq fishers has been fined and temporarily banned from working in the Nova Scotia industry.

Judge Tim Landry on Monday fined Shen Ren Zheng and his company, Guang Da International, $50,000 each and prohibited Zheng from buying, selling, trading or possessing any fish harvested off Nova Scotia for the next two months.

The Digby provincial court judge also ruled that the company's lobster shipment -- seized at the airport during a 2017 sting operation -- will be forfeited, and that Zheng must report details of his commercial activities to the federal Fisheries Department for the next two years if he returns to the industry.

Landry concluded the shipping of the lobster caught by the Indigenous fishers was an intentional act and "the potential for lucrative profits obviously existed for the accused in this case."

Zheng and his company were found guilty in August of illegally selling lobster harvested under communal food, social and ceremonial licences, including lobster caught by Sipekne'katik First Nation fishers.

There was no evidence presented in court indicating any money had changed hands between buyers and sellers of the lobster caught in the ceremonial fishery. The small-scale fishery, however, has drawn criticism from non-Indigenous fishers in southwestern Nova Scotia, who have called for stricter controls on illegal sales of the harvest from St. Marys Bay.

The sentencing came after months of tensions between Indigenous and non-Indigenous fishers over the self-regulated, moderate livelihood fishery that Sipekne'katik First Nation launched in September in the bay.

Crown prosecutor Mark Stares had asked during a sentencing hearing on Nov. 12 for a fine between $50,000 to $75,000 for Zheng and the firm he owns. "This was an ongoing commercial scheme that was in reality, a ruse to cover up black market dealings," Stares said at the time. "Those who work in regulated industries ... have the responsibility to obey all the rules."

Stares said in an email that the original charges stemmed from an October 2017 operation by federal Fisheries officers in St. Marys Bay. He said officers attached tracking devices to 73 lobster.

The officers followed Zheng's truck containing 15 of these specially tagged lobsters to the Halifax airport, where they halted and seized the shipment before it was put on a flight bound for China. Prosecutors say the shipment was valued at approximately $50,000.

Speaking through a Mandarin translator, Zheng told the court on Monday the incident has had a major impact on him and his business, adding that his company is being auctioned off by the bank and he has declared personal bankruptcy.

He asked the judge to reduce the fine, in consideration of his personal finances. He said he's been unable to operate his factory since the pandemic and is currently unemployed.

Landry said he would permit 24 months for Zheng to pay the fines, and he said the ability to pay a fine is only one factor in determining the sentence.

"The court found in the commission of this offence, an intentional, illegal act in a regulatory regime. The penalty cannot simply be the cost of doing business," the judge said.