N.S. man cites 'vulgar' government ads in bid to get licence plate back 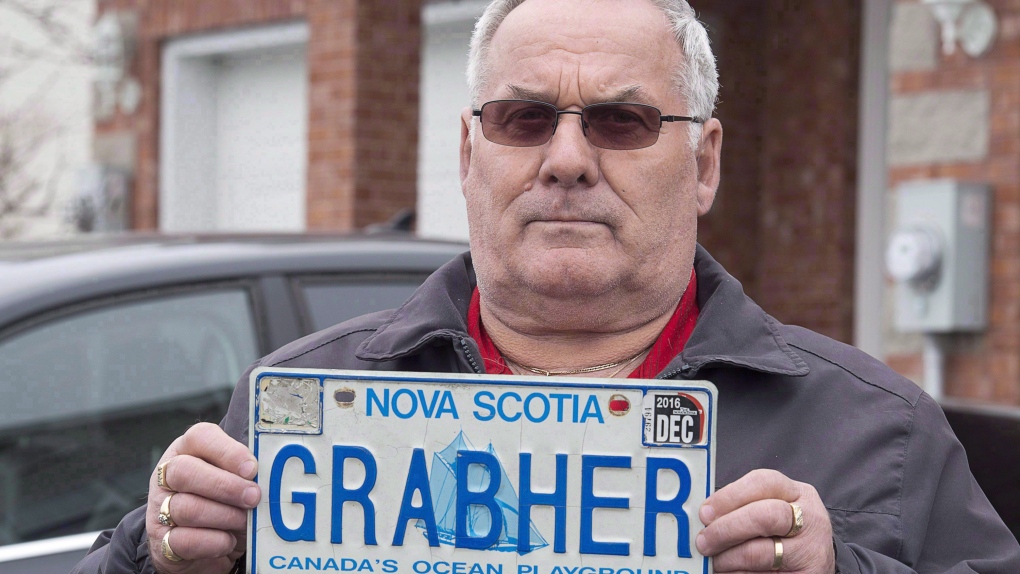 HALIFAX -- A Nova Scotia retiree who is fighting to regain a personalized licence plate after it was deemed unacceptable says governments allow many potentially offensive phrases and names, and anonymous complainers should not be able to take his good name from him.

The provincial government withdrew Lorne Grabher's licence plate -- it reads simply, "Grabher" -- after officials agreed with a complainant that it was a "socially unacceptable slogan."

In an affidavit filed this month in support of his constitutional challenge of the decision, Grabher cited Halifax Water transit ads headlined "Our minds are in the gutter," "Powerful sh..t," and "Be proud of your Dingle," the last one a reference to a prominent waterfront tower.

"In my view, it is glaringly arbitrary and hypocritical for government to engage in such vulgar expression, when I am prohibited from displaying my surname on a licence plate," he says in the affidavit, filed in Nova Scotia Supreme Court.

He also cited Sandy Hook, Manitoba, saying the name has become affiliated with gun violence after the 2012 school shooting at Sandy Hook Elementary School in Connecticut.

Grabher's battle is supported by the Alberta-based Justice Centre for Constitutional Freedoms, which argues that the wording of regulations for personal licences are so vague they violate freedom of expression guarantees in the Charter of Rights.

Grabher notes his family had used the plate for 27 years in Nova Scotia before the province withdrew it on Jan. 12, 2017, and a family member continues to use a similar plate in Alberta.

He says he has not intended to offend anyone, and is "profoundly insulted and humiliated" that his name had been deemed offensive.

"I am increasingly dismayed by the hypersensitivity of some people who are 'offended' by every little thing they encounter. I am further dismayed that these 'easily offended ones' are not content only to be personally offended. Rather, they seem uniformly inclined to try to use the power of a supposedly 'neutral' state to do something about their whining," he says in the affidavit.

"I am dismayed that some anonymous, misinformed, overly sensitive individual, hiding behind their anonymity, can dictate to an entire province that my good name is suddenly an 'offensive slogan,' when it has never before been any such thing, nor is it today."

Grabher says his last name is a point of pride for his family and its Austrian-German heritage.

A spokesman for the provincial Transport Department has said while the department understands Grabher is a surname with German roots, this context isn't available to the general public who view the plate.

The department has said the rejection of Grabher's licence wasn't related to obscene comments made by Donald Trump in 2005 and released during last fall's U.S. presidential campaign, in which Trump said he grabbed women by the genitals.

Grabher's case will be heard next September.