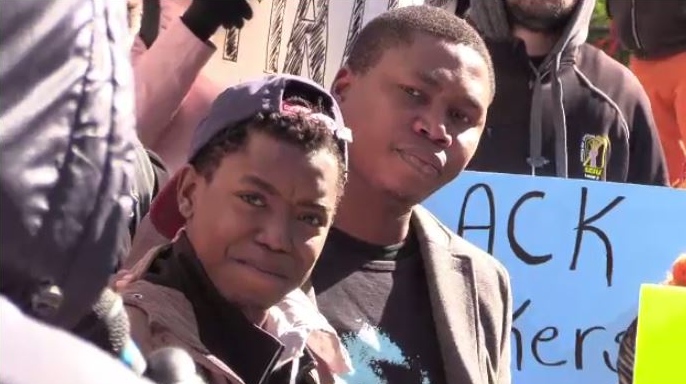 Nhlanhla Dlamini (left) was working at a construction site in Abercrombie, N.S., in September 2018 when he was struck in the back with a nail from a nail gun.

PICTOU, N.S. -- A Nova Scotia man who shot a young, Black co-worker with a nail gun received a conditional sentence on Friday from a judge who cited the province's history of racism in his decision.

Provincial court Judge Del Atwood said construction worker Shawn Wade Hynes will serve his sentence in the community and carry out community service with a focus on respect in the workplace. Atwood ordered him to pay $2,080 in restitution to the victim, Nhlanhla Dlamini, and gave Hynes one year probation.

The Trenton, N.S., resident was convicted of criminal negligence causing bodily harm and assault with a weapon in September 2019 for shooting Dlamini -- who is in his 20s -- with a framing nailer at a construction site in Abercrombie, N.S., on Sept. 19, 2018.

Dlamini suffered a punctured lung from the 3.5-inch nail, was hospitalized for four days and was unable to work for more than a month.

Atwood noted in his sentence of Hynes, who is white, that "anti-Black discrimination is a historic fact that is continuing."

The judge said he believed the 45-year-old veteran worker viewed the young man -- whose family is from South Africa -- as "someone lesser, someone vulnerable." In addition, Atwood said the incident caused the wider African Nova Scotian community "to relive historic trauma."

"Violence of this nature in the workplace operates to perpetuate structures of inequality in access to employment for communities that have experienced generations of formal and informal discrimination," said Atwood, who delivered the sentence in Pictou, in northeastern Nova Scotia.

"These injustices have gone on for generations and are continuing."

The defence had argued for a suspended sentence and probation, saying that Hynes had suffered a great deal from negative publicity, that his actions were out of character and that he had never committed an offence before.

The judge acknowledged those factors, but said they had to be weighed against "the unequivocal need for denunciation" of Hynes's actions.

Under the terms of his conditional sentence, Hynes is required to remain on his property in Trenton, but is allowed to continue working, attend medical clinics, meet with his probation supervisor, attend to personal needs for five hours each week, and carry out his community work.

According to the judge's sentencing statement, Hynes has returned to work after taking seven weeks of stress leave following his conviction.

This report by The Canadian Press was first published April 23, 2021.