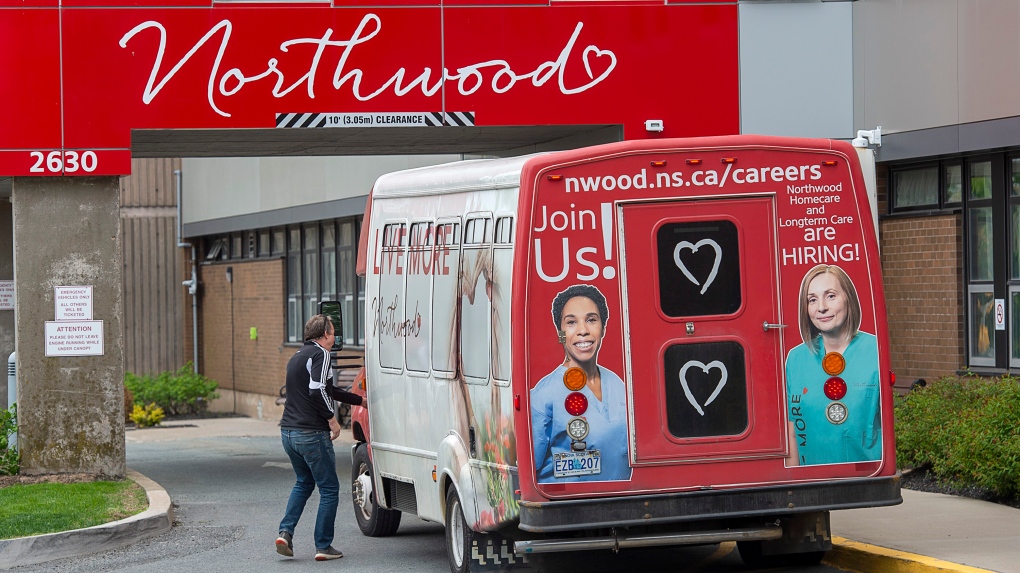 A driver enters a shuttle bus at Northwood Manor, one of the largest nursing homes in Atlantic Canada, in Halifax on Tuesday, June 2, 2020. The Nova Scotia Nurses' Union says pandemic infections and deaths in the province's nursing homes have been a "tragic reminder" of the province's failure to bring in higher staffing levels it recommended four years ago. (THE CANADIAN PRESS/Andrew Vaughan)

HALIFAX -- The Nova Scotia Nurses' Union says COVID-19 infections and deaths in the province's nursing homes have been a tragic reminder of the province's failure to bring in higher staffing levels it recommended four years ago.

The preface to a study paper released Friday argues the lack of nurses to assess residents and monitor those with severe dementia is "highly relevant" to the control of infectious disease.

"I implore government to take action so we do not fail these citizens."

The union -- which represents about 1,400 nurses -- hired Charlene Harrington, an expert on long-term care staffing who served on the U.S. Institute of Medicine Committee on Nursing Home Regulation, to prepare the 27-page paper.

Her review confirms recommendations from the union's 2015-16 "Broken Homes" study, calling for an average of 4.1 hours of care per resident per day, including 1.3 hours of nursing care.

According to the union, that would mean adding about 600 nurses and 1,400 continuing care assistants.

Harrington's work was completed prior to the pandemic, but a preface has been added to the report which says her findings are given added urgency by the COVID-19 deaths and infections of the past three months.

The preface notes the tragedy at the Northwood care homes in Halifax, where 246 people were infected and 53 people died during the last three months.

It says the province needs an independent review to determine the factors that led to the outbreak and to recommend solutions.

The preface says Northwood lacked staff after many care workers and nurses became ill in the pandemic, swiftly putting the home in a crisis situation that required it to call in nurses from local hospitals.

"If long-term care facilities in Nova Scotia had higher staffing levels, they would be better positioned to handle these crisis situations," it says.

Premier Stephen McNeil said during a news conference Friday that his Liberal government will be considering a review of what occurred in Northwood during the pandemic.

"Obviously we are looking at what transpired at Northwood and what changes are required and what protocols need to be in place. We'll look at all of that and I look forward to hearing the results," he said.

Asked about the nursing union's call for increased hiring provincewide, McNeil said, "We're doing an assessment of that."

He then noted a 2018 expert advisory panel on long-term care, created to provide recommendations to Health Minister Randy Delorey, hadn't made a recommendation for higher staffing ratios.

The union report also reveals that inspection reports last year and so far this year show 16 facilities were cited for not meeting the requirement that a registered nurse be available for 24-hour coverage.

"Well-trained staff in sufficient numbers is an important bulwark against a threat like COVID-19," says the report's preface.

Harrington says in her report that it's reasonable for her to recommend that Nova Scotia's 7,000 long-term care residents benefit from staffing levels that meet minimum professional standards established in research literature.

She says existing studies suggest 1.3 hours per resident per day of nursing care and at least 2.8 hours per day of personal service worker care daily, for a total of 4.1 hours. The expert noted the figures should be higher for patients with more serious medical conditions.

Hazelton says the current level of care is an average of about 3.45 hours per day.

The nurses' union president said there are many nursing graduates looking for work in the province, but the long-term care homes don't have the budgets to hire them.

This report by The Canadian Press was first published June 26, 2020.