N.S. premier promises to keep a close watch on people in vehicles with U.S. plates 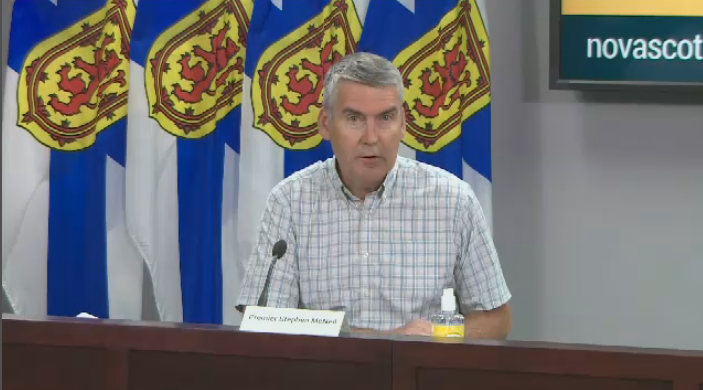 "We want to be open and welcoming but we are not going to let our guard down." said Nova Scotia premier Stephen McNeil during a news conference in Halifax on July 3, 2020.

HALIFAX -- With an increasing number of Nova Scotians complaining on social media about seeing cars with American plates entering the province, Premier Stephen McNeil has pledged to keep a closer watch on those showing up at the border from outside Atlantic Canada.

However, McNeil also warned Nova Scotians not to jump to conclusions about the people in those cars, saying most of them are probably Canadian citizens coming home after living or working abroad.

"There are lots of stories circulating, conversation on social media about Americans and others who are coming into our province and not self-isolating," the premier told a virtual news conference.

"If this is true, this is not acceptable. If you commit to self-isolating for 14 days, we expect you to keep your word."

The premier made the comments about 12 hours after the four Atlantic provinces lifted travel restrictions for residents to reflect the region's relatively low and stable COVID-19 infection rates.

Residents of New Brunswick, Nova Scotia, Prince Edward Island and Newfoundland and Labrador can now travel to any of the other three provinces without self-isolating for 14 days after arriving -- but the requirement remains in place for anyone who lives outside the region.

Even though the Canada-U.S. border remains closed to non-essential travel, Canadians citizens living in the United States are allowed to enter Canada, as long as they have a passport and are not displaying symptoms of COVID-19.

There are stories circulating about Americans and others from outside Atlantic Canada coming to Nova Scotia and not self-isolating. If that is true, it is not acceptable. If Nova Scotians have concerns over those not isolating, the RCMP suggested to call your local detachment.

McNeil said Nova Scotians' growing concerns about people coming from the United States has prompted his government to ramp up its efforts to keep track of those entering the province who are not from another part of Atlantic Canada.

Under the current rules, these people must show their identification at the border and say where they will be staying during their 14 days of self-isolation. They must also provide a telephone number. Those intending to stay less than 14 days are being turned away at the border.

"We will be ramping up our calls and check-ins to make sure you are where you said you would be, and you are indeed self isolating," the premier said. "We want to be open and welcoming, but we are not going to let our guard down."

Earlier this week, McNeil made it clear he would not take steps to restrict Americans from entering the province.

"We have never closed our border at any point," he said Thursday, adding there were plans in the works to open Atlantic Canada's borders to the rest of Canada by mid-July.

Last Friday, however, the Nova Scotia government cancelled the 2020 sailing season for the ferry service that links the province with Maine, citing the ongoing struggle to contain COVID-19 in the United States.

"Like many of you, I am concerned about the number of (COVID-19) cases that we hear about in the U.S.," McNeil said at the time.

Progressive Conservative Leader Tim Houston said there is growing anxiety over the rules at the province's border crossings.

"Over the course of the past three-and-a-half months, the province took no steps to address the issues at our border," Houston said in a statement.

"No one, including Americans, have been denied entry -- despite the fact that yesterday alone, the United States of America recorded over 50,000 COVID-19 cases .... While restaurants (in Nova Scotia) were taking names and numbers of patrons, the government wouldn't even do that when cars were entering from a different country where COVID-19 is rampant."