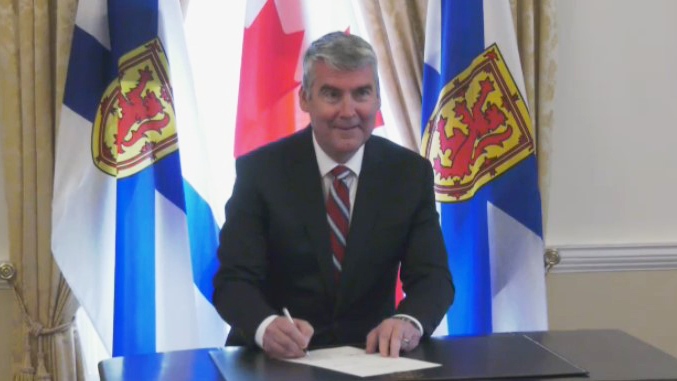 HALIFAX -- Nova Scotia's premier brought a former health minister back for a second stint Tuesday in a cabinet shuffle that follows high-profile resignations of three men vying to replace him as Liberal leader.

Stephen McNeil touted Leo Glavine, who served in the health portfolio from 2013 to 2017, as an experienced hand amid the turbulence of a pandemic.

"This is an opportunity for him (Glavine) to hit the ground running. He'll know this all very well," the premier said outside of Government House.

"I'm looking forward to working with him on the major parts of health care and making sure COVID-19 gets dealt with."

Glavine replaces Randy Delorey, who resigned his cabinet post last week and became the last of three former ministers seeking the leadership when McNeil steps down this winter.

Glavine -- who represents the Annapolis Valley riding of Kings West -- said he realizes he's inheriting a challenging portfolio in an era when a COVID-19-related budget deficit will limit resources.

He said he'll renew efforts to save money in the $4.8-billion health-care costs budgeted for 2020-21, finding ways to "do more with the same amount of money."

Post-pandemic, Glavine said he's hopeful the use of tele-medicine will allow some doctors to take on additional patients and provide treatment more efficiently.

Glavine, who continues as seniors minister, said he's hopeful that long-term care facilities will increase admissions, which have been significantly reduced since the pandemic began, to deal with growing waiting lists.

"Getting our seniors out of hospitals and into nursing home beds that are available is a top priority and one that should see some gain in a relatively short time," he said.

Suzanne Lohnes-Croft was the sole new entrant to cabinet, taking over Glavine's portfolio as minister of communities, culture and heritage and minister of Gaelic affairs.

Immigration Minister Lena Metlege Diab adds the Department of Labour and Advanced Education to her responsibilities.

She said the two portfolios complement one another well, as the province has sought to recruit growing numbers of international students as permanent residents.

Some political commentators had suggested Diab might become the sole woman to take a run at the leadership, but she said on Tuesday the time was not right.

"I'm proud of what I've contributed to this government," she said. "I look forward to the next opportunity to expand on the work I love to do, and we'll see what the future brings beyond that."

The shuffle means Energy and Mines Minister Derek Mombourquette will also take on the lands and forestry portfolio.

This report by The Canadian Press was first published Oct. 13, 2020.